The Astro-Politics of Water: Michigan’s March 6th debate and the Flint Water Crisis 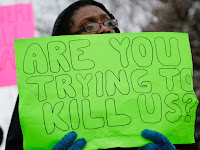 No surprise here - the Democrats have chosen to stage their March 6th debate in Flint, Michigan.


Michigan news rarely goes national, much less global, but the news these days out of Flint, Michigan has tragically defied those odds. In a January post (see listings at right) I covered the basics of the so-called Flint Water Crisis—the callous, state budget-driven poisoning of city water with lead, and the resulting health crisis—but this story continues to evolve with more troubling revelations and developments, adding to its critical importance in the March 8 primary elections.
Both Democratic candidates have been busy courting Flint voters—Clinton has worked with city officials and allies from the state and federal levels to craft her plan for Flint going forward. Her lengthy Feb. 8 interview about Flint with MSNBC’s Rachel Maddow closely preceded the New Hampshire primary, where it may not have resonated, but Clinton has since gained the endorsement of Flint Mayor, Karen Weaver, and Bill and Chelsea Clinton have kept the Clinton agenda alive in Flint. Importantly, the ads we’re seeing that feature Hillary meeting with Flint residents about the crisis are grounded in truth—she’s been there, done that, repeatedly.
For his part, Sanders called for Michigan Governor Rick Snyder’s resignation over the crisis way back in January when the story broke, and since then he has gained traction in the 57% African-American Flint community. As he does often, Sanders chooses to address the broader, structural economic issues that he claims produce the crises and injustices we’re seeing in Flint and elsewhere. Importantly for the March 6 debate, Sanders has been highlighting the damage done by our national “free trade” policies—Bill Clinton-supported agreements such as NAFTA and CAFTA—that have robbed cities like Flint of thousands of middle class jobs and gutted the city tax base, with predictable effects (Flint being taken over by an “emergency manager” for years is a major part of the problem here).


The puzzle for today…
It will be interesting to hear how Clinton answers these concerns in the debate, and to what extent Sanders is tapping into a past astrological moment that’s come back to haunt us. To explore this astrological puzzle, I’ve cast a biwheel setting Bill Clinton’s signing of the NAFTA Implementation Act (December 8, 1993) against the Flint Debate scheduled for March 6, 8 p.m. How has that signature moment in Clinton’s presidency and the “Roaring ‘90s” impacted today’s toxic mix of economic malaise, crumbling infrastructure, and “environmental racism” in older U.S. cities like Flint? (biwheel below)

Debate Uranus (Aries) squares Debate Pluto, which conjoins NAFTA Uranus-Neptune (Capricorn). It’s important to remember that NAFTA, and economic globalization more broadly, are the offspring of the Uranus-Neptune cycle that kicked off in February 1991 at 19°+Capricorn, furthering Reagan’s anti-regulation, conservative agenda. So it’s not surprising that before Clinton was elected in 1992, president George H.W. Bush had already promoted the preliminary stages of the NAFTA agreement. Bill Clinton merely finished what had been started, moving Democratic policies firmly to the center—where they’ve been ever since—in the process.
Still square Uranus, transiting Pluto is now catching up to that significant 19th degree in Capricorn, which suggests that the agreement is increasingly toxic and primed for a shake-up (if not a take-down). While Clinton appears ready to slap more regulations on corporate outsourcing, price-gouging and Cayman Islands tax havens, Sanders goes for the jugular with NAFTA, which is perhaps more in tune with the Uranus-Pluto square.
On another note, this complex also speaks to the volatility we’re seeing on Wall Street lately. NAFTA and globalization in general worked to eliminate structural barriers (Capricorn Neptune) to global capital flows. This opening of the flood gates (Neptune) has overwhelmingly accrued to Wall Street’s benefit (Capricorn) and to the detriment of local economies. Hence, the steep “income inequality” and anxieties about financial security we’re grappling with today on both sides of the political divide.

Debate Moon-Venus conjoins NAFTA Saturn (Aquarius), which is in mutual reception with NAFTA Uranus (Capricorn). The restructuring of national trade policies to feed Wall Street was powerfully implemented by Saturn, disposing Uranus-Neptune in Cap and basically rendering globalization an “inevitable” phenomenon via the mutual reception. Neptune’s contribution has been seen in the waves of corporate buy-outs, downsizing, right-sizing and off-shoring that ensued in the decades since NAFTA took hold (we’re still in the first quarter of this new Uranus-Neptune cycle). A Neptunian “leveling out” of global wages has resulted, producing the downward pressure on wages and the wage stagnation we've been living with since the 1990s.

The interesting convergence of Debate Moon-Venus with this powerful NAFTA Saturn suggests that the impacts of globalization on everyday people will be an issue in the debate. Clinton’s own 22°+Pisces Moon may be emotionally ill-at-ease with any debate questions on this topic (the conversations at home on this issue must be lively!).

Debate Saturn squares Debate Neptune (Pisces) and trines Debate Uranus. We’ve seen how Debate Saturn ties into the powerful mutable t-square between these charts; here we see how that connection draws the heavier movers and shakers into the fray. Not only is Saturn within 30 degrees of its new cycle with Pluto (exact at 22°+Capricorn in 1/2020), but its cycles with Neptune and Uranus are also quite active at this point. The clashing agendas of Saturn-Neptune and Saturn-Uranus reflect today’s political chaos—the first wants to dissolve structures and “collectivize” (as in Sanders’ more “socialist” leaning policies); the second wants to promote more individualistic, but ultimately authoritarian structures (the so-called corporate oligarchy feels at home here).
My thanks to astrologer Shane Ward for reminding his readers that Saturn-Pluto’s system-destroying agenda envelops and channels what happens with these other Saturn cycles. This says to me that it’s possible capitalism itself will have a new face come 2020. Ward also reminds us that the task of “ushering out the old order” may be the reason younger candidates are not gaining traction this year.

Debate Jupiter (Virgo) disposes Debate Sagittarius and Pisces placements (Mars, Mercury, Neptune, Sun, Chiron). Jupiter wields quite a bit of clout in the Debate chart through these dispositorships, which—with the Node and Chiron’s involvement—feels a lot like a warning. We need to “get it right” this election (Virgo)—now, if we can just figure out what that means!

A story for all of us, and it’s just getting started…
Despite the chaos and flat-out craziness of Election 2016, the fact that Flint’s crisis would occupy political center-stage for the Dems’ debate is a definite positive. As one article put it, the Flint crisis exists at “the intersection of race, socioeconomics and environmental issues,” and this is not unique to Flint—it’s happening around the country! This view will undoubtedly inform the debate for both Clinton and Sanders.

March 3 at the Fox...
At a significant 1-1/2 hour distance from Flint, this week’s Republican debate is taking place in Detroit’s ornate Fox Theater, where the discourse is likely to be more about the intersection of crass, cruel and absurd. Will we see Donald Trump in Flint?


Raye Robertson is a practicing astrologer, writer and former university English instructor. A graduate of the Faculty of Astrological Studies (U.K.), Raye focuses on mundane, collective-oriented astrology, with a particular interest in current affairs, culture and media, the astrology of generations, and public concerns such as education and health. Several of her articles on these topics have been featured in The Mountain Astrologer and other publications over the years. Raye can be contacted by comment here, or at: robertsonraye@gmail.com.

Posted by Raye Robertson at 3:46 PM