By what astrological “feather” do we “weigh the hearts” of key candidates and determine if they are fit for the “afterlife” of the U.S. presidency? This practice, illustrated in the Egyptian Book of the Dead, reveals some important wisdom for today: just as the ancient subject’s “heart” was required to exactly match the weight of the “feather of truth,” so today’s aspiring candidates must be able to strike an incredibly delicate balance between any number of forces. If they don’t get it right, they are, as the Book says, “eaten by the waiting chimeric devouring creature Ammit, composed of the deadly crocodile, lion and hippopotamus.” A dramatization, of course, but I would bet the horrors devised by the ancients have nothing on the pitfalls of U.S. politics. 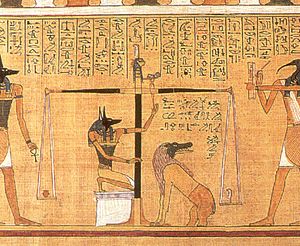 The temptation to predict election outcomes this year is very strong, but again, by what measure? I’ve examined the charts and the interchart relationships between top-tier candidates and the election day chart, and between these same candidates and the U.S. chart, and one thing stands out: every candidate in the field has many key connections with both these charts. The Table below details the total number of traditional Ptolemaic aspects each candidate enjoys between his/her natal chart and the other two charts (the orbs I’ve allowed are noted beneath the chart). Unfortunately, we have no precise birth times for two major candidates, Ted Cruz and Marco Rubio, so a number of aspects could be missing or mistaken.

If the number of inter-chart aspects is all we need to predict a winner, Sanders would have it by a whisker over Trump here. On this day after the Iowa Caucuses, however, such an outcome seems to be a stretch. Or is it? The trouble is, this tally begs the question whether it’s the quantity or the quality of the aspects involved that tip the scales in favor of one candidate over another. For instance, a close examination would unearth interesting aspect patterns, such as three Yod aspects between Bernie Sanders’ natal chart and the Election 2016 chart.  Trump and Clinton are contenders in the interchart T-square contest, but maybe interchart Grand Trines and angular connections are more important?

There’s more…how should we weigh the relative importance of cardinal aspects, as opposed to fixed and mutable ones? Election Day charts are cast for sunrise and the Sun will always be in mid-Scorpio (U.S. November elections), so the Sun and AS will always be close: how much do candidate aspects to those points really matter? For that matter, which points in the Election and Sibly charts hold the keys to presidential success, and do hard or soft candidate aspects to those points win the day? How about concentrations of chart positions in the so-called “power” sectors of the Zodiac? Bottom line, which magical combination of factors will match that “feather” on the scale?

The Establishment & Electability
If we can believe today’s pundits, the salient brew for the highest office will include equal parts anti-“Establishment” credibility and “Electability”—both intangible (in the “eye of the beholder”), if not paradoxical qualities.  It is the planetary dynamics that underlie these two qualities that interest me here, however, and for that we need to think beyond “eye of the beholder” factors into the core realities that drive today’s political contests.  Let’s begin with the “Establishment.”

Clearly, some astrological factors register as being more “Establishment”-oriented than others. Saturn and Jupiter rank high on this list, with their rulership over Congress and the Judiciary.  Importantly, this duo also co-rules the ideas/intellectual content and the day-to-day administration of non-political social institutions that ultimately impact the political process: higher education, “think tanks,” philanthropic foundations, churches, and so on. Certainly, elements of the Media are also governed by Saturn and Jupiter (i.e., government liaisons, public relations reps, etc.), but the conventional rulers of Media and the technologies involved are Uranus and Mercury.

In fact, we usually look to Uranus, with its predilection for sudden, surprising change and liberatory impulses,  as being anti-Establishment. “Freedom of speech”—the foundation for the Media’s watchdog and public information role in society—is ruled by Uranus, as is shocking “gotcha” type of journalism and now, the “Internet freedom” that broadens so many horizons.

It’s important to realize, however, that for Uranus, liberation means breaking away from whatever the existing power dynamics are, for better or worse—there’s no value judgment being made by this planetary maverick. Uranus had as much to do historically with the rise of the Nazi party (and today, with the rise of that party’s ideological descendants) as it did with the American Revolution. As we know, one person’s “freedom” on the Internet can mean cyber-stalking or worse for another person. The so-called Age of Aquarius has both light and dark sides.

Then there are the 500-lb. gorillas…
Which brings us to Neptune and Pluto—the ever-present planetary “500 lb. gorillas” in our political process. Representing the almost primal force of Money, Power and Illusion-making that circulates throughout our system, these two both fuel and distort our political process. These planetary power-players trade in our deep, almost mythic longing for the American Dream and for the “greatness” that seems so elusive these days—persistent themes in every election cycle. A lot has also been said this election season about the impact of Wall Street and Big Money in our society and in our campaigns—this speaks directly to Neptune and Pluto and their behind-the-scenes influence. 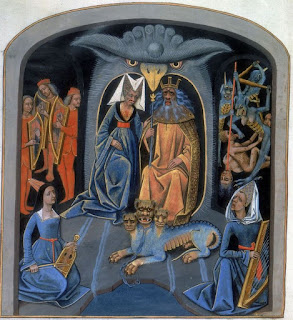 Perhaps the most blatant illustration of this point in recent history is the January 21, 2010 Supreme Court decision on Citizens United v. Federal Election Commission, which ruled that the First Amendment guarantees the right of individuals and non-profit corporations to spend unlimited dollars on political campaigns. Widely considered the result of high-powered lobbying by the billionaire donor class (the Koch brothers, et al), this decision not only opened the flood gates of unregulated campaign donations, but it threatens the very “one-person/one-vote” nature of democratic politics.

Some might even say that this development represented a “coup” of sorts, remaking the nation into an oligarchy. This raises serious questions about what really constitutes the “Establishment” today. Is it the “Big Spenders” on Capitol Hill? Or, is it the “Big Spenders” installing people in offices on that Hill? 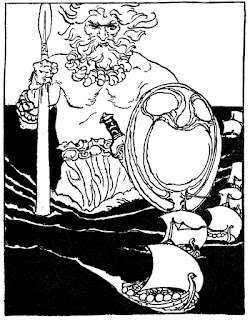 Establishment Heavies at work
Not surprisingly, a biwheel cast between Citizens United and Election 2016 suggests that the influence of that decision will be felt in this election, and that Neptune and Pluto will continue to play the “heavies” (chart follows):

CU Chiron-Neptune-Jupiter (Aqu-Pis) conjoin Election Moon, square Election Mercury-AS (Scorpio); Election Chiron (Pisces) trines Election Mercury. Public sentiment is reflected in the Election Moon (set for sunrise); in Aquarius, this suggests that the American public will wake up that day in a feisty, change-oriented mood. Interestingly, this Moon conjoins the 27°+Aquarius Moon in the U.S. Sibly chart, so the day promises to recapture the emotional spirit of 1776. Worth monitoring, the Citizens United Chiron-Neptune-Jupiter trio may trigger excesses in that Election Day rebellious spirit; voting irregularities and false returns are more than likely. The public’s growing wound of mistrust for government (reflected in Election Chiron trine Election Mercury) will be a persistent theme of the election and may prove warranted by the time all votes are counted.

CU Neptune is in mutual reception to CU Uranus; CU Jupiter sextiles CU Pluto (Capricorn); CU Uranus squares Election Saturn, Venus (Sagittarius), trines Election Mercury. The 7-year mutual reception of Uranus and Neptune (2003-2010) created a lot of mischief, with Neptunian “sleight of hand” used to pull off previously unacceptable changes, and Citizens United was a good example of that.  Neptune’s alliance in the CU chart with the largesse of Jupiter (in Pisces, also disposed by Neptune), combined with Jupiter’s sextile with CU Pluto (Capricorn) reflects the deep pockets that promoted this controversial decision and the “opportunity” it represented for them. CU Jupiter conjoins the Election IC along with the Moon, reflecting these hidden benefactors.

CU Pluto/Mercury (midpoint in Capricorn) sextiles Election Neptune (Pisces) and trines Election Node. The same deep-pocketed forces who found receptive ears in the Supreme Court are likely to do their best to sway the American public this election year. Bottom-line thinking (Mercury in Capricorn) will weigh heavily in people’s votes. The public will probably feel exhausted with the process by election day.

CU Sun-Venus (Aquarius) conjoin Election Mars (Capricorn); Election Mars and Pluto (Capricorn) co-rule Election AS (Scorpio) from 2nd-3rd houses. A shocking, unprecedented amount of money (Venus) will circulate during this election process, making a “bought and sold” election a real possibility. Wall Street (Mars in Capricorn) will be out in force to aggressively protect their interests, but the prominence of Mars in this chart could also indicate success for an older man (Bernie Sanders?).

Election Saturn/Venus (midpoint in Sagittarius) trines Election Uranus (Aries). Election Saturn disposes Election Mars and Pluto (Capricorn). Voters will likely be looking for a new “relationship” with government, and their economic growth and sense of fair treatment (Venus is disposed by Jupiter in Libra) look to be the stakes. Whether this translates into a challenge to capitalism itself, as our default system, is an open question.

CU Mercury-Pluto (Capricorn) trine Election MC-Node (Virgo). As noted in the last point, the excesses of capitalism as an economic system are under scrutiny these days—this powerful Mercury-Pluto combination reflects the billions that have been channeled into Election “messaging” that supports the status quo. Whether that economic force can be leveraged to another point-of-view’s advantage remains to be seen. Pragmatic problem-solving and “getting the job done” (Virgo) will likely win the day when the messaging is all said and done.

So, what makes a candidate “electable?”
An issue for Part II of this discussion, coming soon—electability is an elusive quality that also has a lot to do with our “heavies” Neptune and Pluto.  Can the candidates defy these planetary gorillas and win, or must they burn sacrifices on their respective altars, hoping for a boon? Myth alert—it might get ugly!