The Cosmos really outdid itself this past week, spinning a web of synchronous Events, writ large. As the title here suggests, in the space of three days, we learned of three world-shaking developments—a breathtaking scientific discovery, a long-overdue convergence of East and West, and last, but certainly not least, a dramatic exit on the part of Supreme Court Justice Antonin Scalia. With the benefit of a few days’ hindsight, it seems to me that this week will be remembered for some time to come—not just for what happened, but for the astrological dynamics in play. Let’s briefly consider each event and then examine highlights from each chart.

The “Chirp heard ‘round the universe”
On Febuary 11th, scientists collaborating with LIGO (Laser Interferometer Gravitational-Wave Observatory) and the Virgo Interferometer announced the “first observation of gravitational waves”—what the news has since called the “Chirp heard ‘round the Universe.” According to the announcement, this signal (named GW150914) was formed by two inspiraling black holes colliding and merging. Not only was this a magnificent discovery on its own scientific merits, but the fact that it confirms Albert Einstein’s theory of general relativity—presented in November 1915—is simply mind-blowing.

East meets West
This incredible week only picked up momentum from there: if two black holes can meet up and issue a “statement,” then why can’t two Earth-bound religious leaders do the same? Just such a meeting transpired on February 12—two years in the planning (and secret until the week prior)—as Pope Francis I of the Roman Catholic Church and Patriarch Kirill, head of the Russian Orthodox Church, embraced and sat down together in an airport VIP lounge in Havana, Cuba. The Pope, of course, meets with hundreds of dignitaries in a year, but this meeting was long overdue—from about 1054 AD—when the so-called Great Schism split what then constituted Christianity into Eastern Orthodox and Roman Catholic persuasions. In Havana, the church leaders signed and issued a joint declaration expressing solidarity and a call to end the persecution of Christians in the Middle East and Africa. 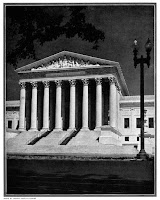 Cue upstage…
Then, right on cue to upstage both of the above history-making events, Supreme Court Justice Antonin Scalia was found deceased the morning of the 13th in a south Texas hunting lodge suite, of apparent natural causes. Leaving a super sensitive, conservative void on the Court, Scalia’s death triggered a political drama befitting this Grand Opera-loving Justice—much more to come, undoubtedly. Colliding black holes and embracing religious leaders have nothing on this scene: fervent choruses on the Right shrieking “No! No! No!…Obama will not name the new justice!...on the Left, molto vivace voices counter, “Yes! Yes! Yes! He will! All we need to complete the drama is Bugs Bunny conducting the orchestra.

What is the sound of two political black holes colliding, we might wonder? Judging by the charts for the above events, it must sound a lot like Saturn and Neptune squaring off, and Saturn-Uranus trining—all against the backdrop of the Uranus-Pluto square and a waning Saturn-Pluto cycle. A bar or two of the “Anvil Chorus,” perhaps? In fact, just by virtue of their close timing, all three events express siimilarly dramatic outer planetary dynamics. Just when you think the story of these cycles is getting old, the Cosmos hammers that anvil all over again, sparking unimagined possibilities.

“Gravitational Wave detected” chart
First a quick caveat before we consider chart highlights. Even though the imagery provided by Saturn-square-Neptune makes February 12 the perfect, symbolic day for the LIGO announcement—i.e., Saturn = Gravity; Neptune = Waves—I’ve cast the chart for the published moment the “chirp” was first heard in September 2015 at the LIGO observatory in Livingston, Louisiana. Saturn and Neptune were quite prominent then, as well, although still applying to their square.

4th house angular Saturn is at powerful 29°+Scorpio, square 12th house Mars- Ascendant (Leo) and applying to a wide square with 7th house Neptune (Pisces). In its role as the ruler of gravitational force and the space-time dimensions thereof, Saturn is truly the “heavy” here, pulling all eyes to the bottom of the chart. The 29th degree of any sign packs a punch—in Scorpio, even more so. With Pluto disposing Scorpio, the power of Saturn’s placement is magnified and radiated throughout the chart via Pluto’s square with Uranus—reflecting the technology involved in this magnificent scientific moment. In fact, Uranus’ role in the 8th house of this chart deserves closer attention.

Uranus in Aries trines 12th house Venus-Mars-Ascendant in Leo; Uranus opposes Mercury (Libra); Uranus-Pluto (Capricorn) square is in force. What a beautiful expression of Uranus’ role in this discovery—by trine, opening a door (Ascendant) to one of the mysteries (8th house) of the Universe and revealing its hidden treasures (12th house Venus) and potential for further activity (Mars). By dispositor connections, we ping from Mars in Leo to Sun in Virgo to Mercury in Libra, which is situated opposite Uranus—all of which reflects the nature of this fortunate, technologically-enabled “signal detection” event. Such an active network also suggests a strong potential for future communication and learning.

1st house Jupiter in Virgo opposes Neptune and trines 5th house Pluto in Capricorn. 1st house Sun in Virgo opposes 7th house Chiron in Pisces. My thanks to Theodore White for pointing out the serendipitous Jupiter placement here. The discovery was made by a collaboration between LIGO and the Virgo inferometer in Pisa, Italy, so Jupiter in Virgo couldn’t be a better fit, bolstering our dreams of more deeply understanding (Jupiter-Neptune) the universe. The academic prestige (and possibly financial) advantage bestowed by this discovery should be considerable, with Jupiter trine Pluto. Sun opposite Chiron suggests that, as with everything, this power could be leveraged for both light and dark purposes.

As noted above, this momentous “Chirp” also confirmed Albert Einstein’s theory of general relativity, presented in Berlin, Germany just over one hundred years ago, on November 15, 1915. Uranus and Jupiter were both strong in that chart, suggesting a fortuitous scientific discovery of universal importance, with Uranus in Aquarius, Jupiter in Pisces. Jupiter fell trine Saturn (Pisces-Cancer) and Neptune opposed Einstein’s Aquarius Node. Not surprisingly, the LIGO chart is deeply connected to both Einstein’s natal and the Relativity charts. Kudos to all involved!

Pope Francis I & Patriarch Kirill (ROC) meet in Havana to issue Joint Declaration. Based on the approximate time mentioned in the link provided, I’ve cast the chart for February 12, 2 p.m. in Havana, Cuba.

Moon conjoins Uranus in Aries and together square Mercury-Venus-Pluto in Capricorn; Moon-Uranus trine Saturn. The radical compassion (Uranus-Moon) represented by the leaders’ actions gains power (Pluto disposed by Saturn), enhanced by the media distribution of the story (the Mercury-Uranus square is wide, but strengthened by the stellium). As co-rulers of Aquarius, the Saturn-Uranus trine adds supports for the cooperative, collective intent of the groundbreaking declaration that resulted from this meeting.

Yod: Uranus-Moon inconjunct both Mars in Scorpio and Jupiter in Virgo (which are sextile each other); Jupiter trines, while Mars sextiles Venus-Pluto; Pluto disposes Mars; Mars squares Sun in Aquarius. Seriously frustrating power considerations are at stake in the declaration issued by the two leaders, befitting the war-torn, no-win situations in which the current persecution against Christians is happening. The Mars-Jupiter sextile suggests the leaders seized an opportune moment to energize awareness of these issues. Strong sextiles between Jupiter and Mars, and between Mars and Pluto-Venus support the Pope’s consistent agenda of linking war, persecution and other injustices to poverty and exploited resources.

Transcending (Neptune) deeply entrenched divisions (Saturn) for the sake of larger, humanitarian needs seems to be the major take-away from the Pope’s meeting with the Patriarch; how these leaders will apply the powerful energies of that meeting towards closer Catholic-Orthodox relations remains to be seen. The Berlin Wall and the Soviet Union both crumbled under a Saturn-Neptune conjunction—why not East-West divisions?!

Biwheel: (inner) Justice Antonin Scalia birth; (outer) Justice Scalia found deceased in Shafter, Texas lodge (cast for time reported in the news). Perhaps the most dramatic chart of the trio is this biwheel between Scalia’s natal chart and his death announcement. No time of death has been published to my knowledge, but the news did report that when the judge hadn’t shown up for breakfast by 11:30 a.m. on the 13th, the lodge manager entered his room and found him deceased. Despite the uncertain time, the biwheel provides an incredible study in hard mutable aspects—it’s not difficult to see how the justice’s death was so quickly twisted to political advantage, ideological tensions and an intense media flurry. Unfortunately, a sign of the astro-political times!

Much more to come on this as Election 2016 unfolds…stay tuned!