The pundits wring their hands and the GOP’s survival as an intact party registers a tenuous 7.9 on the Political Richter Scale….

Suppose the Cosmos is trying to tell us something?

First, a Party crumbling from within…

Well, astrologically the pundits are on to something—the cosmic “earth” is shaking beneath the GOP’s foundational chart, so the rumblings of doom we’re hearing so much about these days could play out. To examine this, I’ve cast a biwheel, setting the Party’s founding in Ripon, Wisconsin (March 20, 1854, set for noon) against the 2016 GOP Convention (beginning on July 21, 2016). Upsets may happen before then, but any third-party runs and major splits are likely to manifest there in response to delegate battles. As with all organic creations, parties live, die and morph into new entities; if this crisis has legs, it also has numerous precedents in history.

Please note that since I have no exact time for the meeting at which the Party was founded, we won’t be considering the houses, angles and Moon placements in this biwheel. Even so, there’s a lot to discuss and some very compelling historical parallels.

Convention Chiron (Pisces) conjoins and Mars trines Party Sun. I often hesitate to label Mars’ aspects as “malefic,” because Mars activates and energizes other planets it touches and that’s not always a bad thing. With Mars transiting trine Chiron and Chiron conjoining the Party’s Sun, however, it seems Mars could be facilitating Chiron’s wounding action, and in the short term, it may be quite painful. We’ll return to this point—it ties into the overall dynamics in important ways.

Convention Neptune-S. Node (Pisces) conjoin, Convention Saturn (Sagittarius) squares and Convention Jupiter (Virgo) opposes Party Neptune. Since Jupiter and Neptune co-rule the Party Sun, the challenges (Saturn) the Party has experienced to its original ideals this year are not surprising. Historically, Republicans like to remind us that they are the “Party of Lincoln,” but it’s hard to see Lincoln’s ideals in their current tortured platform. As long as Saturn remains square Neptune, building a coherent strategy around coherent ideals will be a challenge. Jupiter has more to say about today’s dilemma below.

Interchart Kite: Convention Jupiter (opposite Chiron) trines Party Jupiter (Capricorn) and Party Saturn (Taurus); Convention Chiron sextiles Party Saturn and Jupiter. This rare inter-chart formation circulates a major, wounding “tremor” throughout the chart, along the Taurus-Capricorn “fault lines.”  Earthquakes result from an unleashing of energies within the earth; this could be an analogous situation—basically saying that the pundits are probably on to something.

Convention Uranus (Aries) squares Convention Pluto (Capricorn) and Party Jupiter-Chiron (Capricorn); Convention Uranus semi-sextiles Party Saturn. These aspects certainly illuminate the repeating cycles of history! A Jupiter-Chiron cycle began in Virgo in that pre-Civil War period when the nation was steadily splitting in two. South Carolina—the first state to secede on 12/20/1860—did so with Jupiter in Leo, opposite Chiron in Aquarius. With secession from the Party a real possibility, today’s cycle is also at opposition—this time in Virgo. What happens when we get to Leo and Aquarius again? (a story for another day!).

The Party was founded approximately 4 years after Uranus and Pluto began a new cycle at 29°+Aries; by that historical meeting on March 20, these points had moved into Taurus and begun separating. With the concerted efforts of the new Republican Party, the country would see a revolution in finance, business and resource exploitation in the years ahead—but first, the expanding nation had to fall apart over how that agenda should proceed, with slavery or without. Today’s nearly separating Uranus-Pluto square (Aries-Capricorn) echoes and encompasses those same dynamics—only today, the “slaves” are working for minimum wages and scant benefits.

Convention Uranus’s semi-sextile to Party Saturn may well represent the proverbial “monkey wrench,” sabotaging the Party’s ability to function.  The much-discussed working class “anger” propelling today’s chaotic politics mirrors the anger of that pre-Civil War era, and since fiscal conservatism (the GOP’s core ideal) hasn’t answered working class concerns, the anger of right-leaning voters is largely paralyzing that “establishment.” Can the Party survive a 3rd party split—or for that matter, a Trump (or should I say “Drumpf”) nomination? If things get really dire, what would the “death” of a major political party look like these days? All questions for another time…on to California! 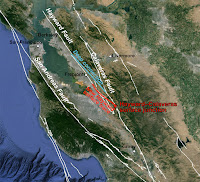 As the fumes rise: California’s “tuning fork fault is lit up”

Speaking of things falling apart, Climate System scientist Paul Beckwith has posted a new YouTube video calling attention to the precarious state of California’s major “tuning fork” fault lines (which includes the San Andreas). Even though there is some controversy about the validity of his findings, his study has at least drawn some attention to what could turn out to be important.

I'm in no way qualified to judge the validity of his study, but the timing of the emissions release does deserve consideration, astrologically. To make sure I don’t misrepresent his work, let’s just take his words, published under the title “Extensive Fault Fracture in California is Real,” on February 29, for what Beckwith says is happening:

On February 25 between 16:00 and 19:00 local time there was a large emission of gases on the west coast of California. Satellite data for CO, CO2 and SO2 every 3 hours clearly show continued emissions for a day then a decline and spreading of gases. This is not instrument error. The images clearly show the gases emitted in the spatial pattern of major California fault lines, including the San Andreas. What does this mean? Not sure, BUT 9 years ago CO emitted in India preceded a 7.4 earthquake by one week. Today is Feb 29, and not a peep from USGS, govt., NASA, scientists...Why NOT???

The Indian earthquake that Beckwith references actually happened on January 26, 2001, so a bit more than 9 years ago—notwithstanding, that earthquake was a doozy (technical term). It registered 7.7 on the Richter scale and killed upwards of 20,000 people, so any geological parallels with that situation should be heeded.

Since Beckwith named a time for the start of the CO, CO2 and SO2 emissions along the “tuning fork” (the complex of fault lines that from a satellite looks like its namesake) that triggered his study (you’re encouraged to watch his video for the details), let’s take a look at that astrological moment in time, set for the California west coast longitude/latitude numbers his presentation references (not far from San Diego):

Sun conjoins Neptune (Pisces), also square Saturn. Neptune is associated with gases, so the notable release of gases due to a breakdown in structure (in the earth) would be perfectly reflected here. The Sun rules this chart with its 29°+Leo rising, making this a significant placement, especially since the Sun sits just 6 degrees from the chart’s sensitive descendant.

T-square: 29°+Leo rising square MC (Taurus) opposite Mars (Scorpio). A dramatic array of tense fixed energies also featured in the Gujarat earthquake chart (see chart below), so this California t-square does feel eerily similar, especially with both Mars placements in Scorpio. The angles of an earthquake chart read like “fault lines,” and California’s minor earthquake count has escalated lately, so the astrology reflects the rumblings.

Interestingly, the Gujarat chart features a complex web of mutable/fixed interactions: Mutable Chiron (Sagittarius) squared Venus-MC (Pisces), so with Venus disposing Taurus Saturn, the fixed t-square may have received a mutable trigger. The Cancer Node in that chart formed an inconjunct with mutable Pluto in Sagittarius, as well—all tied in with Jupiter’s out-of-sign conjunction to Saturn, from Gemini.

T-square: Pluto (Capricorn) squares Uranus (Aries) opposition to the Moon (Libra). This t-square connects the 2nd, 5th and 8th houses with powerful cardinal energies. These houses are natural fixed sectors, suggesting there’s a slow-moving “revolution” (a cardinal assault on fixed positions) in progress. Mars’ dispositorship of Uranus is another red flag to consider.

Last, but certainly not least, the confusion that Saturn and Neptune in hard aspect never fail to produce could explain the resistance some scientists have to Beckwith's conclusions, or it could explain any mistakes Beckwith has made. For the sake of Californians, let's hope the USGS and others figure it out soon! With a powerful Pisces eclipse approaching on March 8, focused on those shaky mid-mutable sign degrees, the story is not yet told.

Fault lines are essentially vulnerabilities—which exist in any astrological entity, including the earth itself—so the parallels between geological and political ones shouldn’t be too surprising. Astrology applies to real life...again and again. Stay safe, California!

Posted by Raye Robertson at 3:05 PM