“Tweedledum and Tweedledee agreed to have a battle:” a Geopolitical look at the Saturn-Neptune Cycle 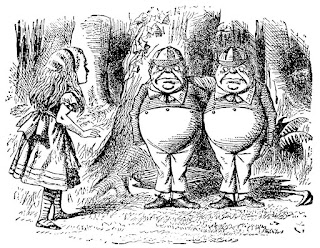 “ ‘I know what you’re thinking about,’ said Tweedledum:
‘but it isn’t so, nohow.’

‘Contrariwise,’ continued Tweedledee, ‘if it was so, it might be;
and if it were so, it would be; but as it isn’t, it ain’t. That’s logic.’”

--Lewis Carroll,
Through the Looking Glass, and What Alice Found There (1871)
Of all the outer planet cycles that make our solar system such a lively place, the Saturn-Neptune cycle is perhaps the most puzzling—and worrisome, as there always seems to be a crisis of some kind brewing. Like our “Looking Glass” heroes above, Saturn and Neptune represent quite contrary impulses—one likes to separate (as in the “real” from the “imaginary”) and one likes to confuse the differences between such categories (is it “real,” or is it “Memorex?”). Saturn contains and limits; Neptune undermines and erodes all limits. The only thing Tweedledum and Tweedledee can agree upon is their perpetual battle—as laid down for them in the nursery rhyme Alice remembers:

Just then flew down a monstrous crow,
As black as a tar-barrel;
Which frightened both the heroes so,
They quite forgot their quarrel.”

In Through the Looking Glass, the Tweedle brothers dutifully accommodate Alice’s imagining by living out the rhyme once again: the “spoilt rattle” appears, they agree to have a battle, Alice reluctantly helps dress them for battle (one sword between them, a saucepan for a helmet), but there’s little enthusiasm for the fight:

“We must have a bit of a fight, but I don’t care about going on long,” said Tweedledum. “What’s the time now?”

Tweedledee looked at his watch, and said “Half-past four.”

“Let’s fight till six, and then have dinner,” said Tweedledum.

In fact, the Saturn-Neptune cycle is all about manifesting a vision—nursery rhyme visions, included. Since the present cycle began in November 1989, the visions have been largely dark—like Dee and Dum, they always seem to end with the “monstrous crow” of death swooping in. Waves of near-apocalyptic anxiety (a specialty) have come and gone, with peaks leading up to “Y2K,” (which went off with a whimper, instead of a bang), post-9/11 and now.

The monstrous crow and the “flat world” order
The fact is, the Saturn-Neptune cycle is manifesting fearsome effects around the world: the final quarter of any outer planet cycle involves “reaping what’s been sown” earlier in the cycle, so it shouldn’t surprise us that we’re seeing the consequences of trends set in place around the time of Saturn-Neptune’s conjunction at 11+ Capricorn in 1989. One such development is economic globalization—what economist Thomas L. Friedman dubbed the “flattening” of the earth. International trade dates back over two millennia, but so-called “free trade” (trade free of barriers, as noted) is a post-WWII phenomenon.

First conceived as part of a long-term vision for the post-war “financial order,” the evolution of that “flat” world order and today’s globalized economy has been marked by a series of major Saturn-Neptune milestones:

Even though the American public had been led to see the “spread of Communism” in a decidedly Neptunian light, as a contagious disease about to become a pandemic, the appearance/reality disconnect proved toxic to official ambitions. The brutal reality (Saturn) was delivered to people on television news every evening, cutting through the Neptunian illusions. In fact, the waxing square phase begun in 1971 laid the groundwork for a lot of today’s geopolitical turmoil: the Vietnam conflict was just winding down when the 1973 Oil Embargo ensued, sowing the seeds for the long-term resource-related turmoil that continues to haunt us in the Middle East.

On November 9th that year, with Saturn-Neptune still conjunct and accompanied in Capricorn by Venus and Uranus, all opposite Jupiter in Cancer, citizen efforts to dismantle the Berlin Wall were rewarded—the barrier between East and West Berlin was officially dissolved and the reunification process began. As Michael Moore reminds us so eloquently in his new film, Where to Invade Next, the Wall didn’t fall by a top-level edict, however; it fell because ordinary citizens began bringing their hammers and chisels, literally chipping away at it.

This new Saturn-Neptune conjunction set conditions in motion for other mind-boggling developments—most notably, the wave of protests across Eastern Europe that precipitated the December 26, 1991 implosion of the Soviet Union (chart below)—in many ways, a function of the world economy globalizing around them, threatening to leave them behind. Uranus’s transit through Capricorn (integral to the Wall’s fall) was certainly a factor, especially since it was transiting within orb of its coming new cycle with Neptune (exact on February 2, 1993, at 19°+Capricorn). Amazingly, all these major developments unfolded with the planets of social change planted firmly in this Capricorn “power sector.”

Importantly—the sensitive 2nd decanate Capricorn Zodiac sector also opposes the U.S. Sibly Sun and George W. Bush’s Sun (both at 13°+Cancer), so Saturn-Neptune’s conjunction opposite that point not only laid the groundwork for the September 11, 2001 terrorist event, but also facilitated the enhanced Executive powers (Sibly Sun = the Chief Executive) adopted under the G.W. Bush administration.

Executive powers have since that time been powerfully challenged by Pluto’s transiting opposition (allowing a 5° orb, from January 2012) and will remain so through at least October 2018. The Supreme Court’s “stay” of Obama’s Clean Power Plan over his alleged “executive overreach” (and the general lack of cooperation he has experienced) are certainly related.

More generally, though, the growing tendency of Americans to blame government for all their ills, forgetting that we are supposed to be the government, is also key. The next president will inherit this Plutonian challenge to his/her leadership and this toxic view of government; for better or worse, our international reputation and stature in the world (also Sibly Sun) are in Pluto’s hands right now; the right use of power is critically important.

Dissolving barriers, climbing on the roller coaster ride
Long story short, at this point in the 1989 Saturn-Neptune cycle, globalization’s mandate for dissolving regulations pertaining to finance, the environment and labor —so-called “trade barriers”— has basically reinvented local (Saturn) economies around a global (Neptune) economic model that the so-called “99%” find so toxic today. It’s not surprising that the U.S. Stock Market’s current roller coaster ride is fueled by dread over the Chinese economy (if their markets sneeze, we get the flu—clearly, their recently-found capitalism has its own “epidemic” potential) and the ever-shifting price of Big Oil, to which currency values and investor confidence are pegged.

Neptune’s rulership of flowing substances cuts to the heart of this dilemma and, as nebulous as the logic behind oil prices is, we can only imagine what is actually happening behind the scenes to perpetuate the economic/geopolitical turmoil. When we stare into Saturn-Neptune’s “Looking Glass,” the way forward is anything but clear, but there are guiding questions: What vision do we wish to manifest? Which structures and institutions have outlived their usefulness and deserve to be broken up and dissolved? What would those same institutions look like if they were rebuilt for the good of all?

Dum, or Dee?
As it always does, the current Saturn-Neptune cycle pushes for accountability in the midst of confusion, smokescreens and passive-aggressive power plays. Individuals—and countries—are either part of the problem, or part of the solution (Dum, or Dee?), but figuring out which is which is always a challenge. When nothing makes sense, perhaps it matters that we’re in this “nursery rhyme” together?

“’And hast thou slain the Jabberwock?
Come to my arms, my beamish boy
O frabjous day! Callooh! Callay!’
He chortled in his joy.”


Posted by Raye Robertson at 4:51 PM No comments: