A Saturnalia for Our Time – Winter Solstice 2015

A few minutes shy of midnight on December 21st (Eastern Standard Time) the Sun will enter Capricorn and thus begin the final quarter of the astronomical/astrological year (which begins every March as the Sun enters Aries at the Spring Equinox). While the Capricorn ingress is given less predictive weight than the Aries one—often used to predict the general tenor of the entire new astrological year—the winter solstice still holds considerable importance as we close out the calendar year and look forward to the first quarter of the following calendar year.

In ancient Rome, in fact, Saturn—the agricultural god and Lord of Capricorn—was a deeply-venerated god whose “festival of light” spanned several days leading up to the winter solstice.  Deeply attuned to the cycles of nature, the populace hailed the “return to light” marked by the solstice because—simply put—survival depended upon it in their agricultural society.  Reportedly, December 25 was celebrated by ancient Romans as the Dies Natalis of Sol Invictus—the “Birthday of the Unconquerable Sun.” Long before Christmas supplanted Saturnalia as the winter festival, people reveled in the longer days and shorter nights that would quickly follow each winter’s end. 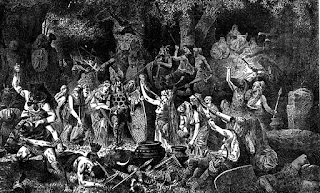 license.” Slaves and masters reversed roles symbolically for a day (with differing accounts of how far that went), class hierarchies were turned upside down, free speech reigned without recrimination, and so on. Saturn’s oversight of social structures and legal restrictions was suspended as the Romans “let it all hang loose” in the god’s honor. By some accounts, war couldn’t even be declared.

The tradition of an end-of-year “blow-out” has morphed over the centuries, of course, but is the behavior of people during the ever-extending Christmas period really any different? Employers typically treat their employees a little more like equals during Christmas (maybe Saturnalia inspired the first worker “bonuses?”), people routinely blow-out their diets, exceed their budgets and max their credit cards, and those on a quest for hot ticket sale items feel liberated to stampede over each other and brawl like street thugs on “Black Friday.” And war, thankfully, couldn’t be declared—Congress won’t be dragged back to Washington until January. 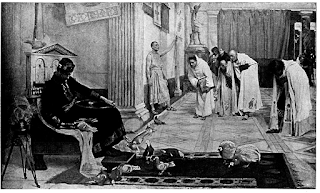 Astrologically, the winter solstice chart gives us a “sneak preview” of conditions that will prevail during the final quarter of the natural, astrological year. Not surprisingly, in this drama-filled year, the coming winter solstice chart bears special consideration. Simply put, it’s a pretty raucous chart as befits the season. Set for Washington, D.C., the chart is shown below:

The Sun falls in the 4th house of “the homeland” and other lunar issues. At 0° Capricorn, the Sun only widely conjoins the IC, but we might still view this final quarter as a symbolic “end” of sorts—certainly, if Trump has anything to do with it, an end to “politics as usual.” A great anxiety over security—a top priority for Cancer/4th house—has overwhelmed us lately, and this anxiety is likely to persist through the quarter. How we act out in the wake of this anxiety will be a matter of American destiny and identity, with the Node falling in the 1st house of this chart and the 10th house of the USA Sibly chart (also conjunct Sibly Neptune).

The Ascendant falls in Virgo; Jupiter and Node in Virgo rise, straddling the AS (12-1); MC (Gemini) falls square Jupiter-AS-Node. As recently pointed out by astrologers Theodore White and Terry MacKinnell, mutable signs are prominent during these unstable-feeling times, and this chart certainly echoes that point. This appears to be a “restrained growth” quarter—the focus of the growth being in Virgoan pursuits such as military, healthcare and other service industries (12th house), but with Jupiter turning retrograde in early January and remaining so into May, frustration is likely to build over those potential areas of growth.

We’re already seeing the saber-rattling that precedes military buildup, so that will probably proceed as expected, with the inevitable Congressional scuffles reflecting Jupiter’s retrograde. Healthcare.gov (Obamacare) may report record enrollments for 2016 (the deadline passes before Jupiter’s retrograde). Human service organizations—especially refugee- and minority-oriented ones—should feel more empowered once Jupiter goes direct in May, however by that time the Aries ingress (equinox) chart will be the guide.

Despite the impending retrograde, the solstice chart indicates Jupiter (and thus Virgoan energy) will influence almost every facet of life during the first quarter, through its complicated network of aspects in the chart. Namely…

Mars trines the MC and is disposed by Scorpio Venus, which trines Chiron. Mars opposes Uranus (Aries). This aspect supports the potential for aggressive actions and suggests that a fair amount of pain and frustration will be released (Mars trine MC; Venus trine Chiron). Uranus falls in the 7th, house of enemies, so we can’t rule out the possibility of antagonistic events.

Jupiter opposes Chiron and squares the MC; Chiron sextiles Mercury.  An article posted here, dated November 20th, discusses Jupiter opposite Chiron more thoroughly as it appeared in the November 13th Paris attack chart, but in the context of this solstice chart, these points straddle the AS-DSC horizon (Jupiter 12-Chiron 6), with Jupiter squaring the MC. This reinforces the point made in that earlier post that social/economic discontent can promote extremist ideologies and actions. The MC square suggests that discontent could happen within our national borders.

Chiron sextiles Pluto in Capricorn as Mercury conjoins the same point. Mercury and Pluto form a grand trine with the Moon (Taurus) and Jupiter. The public mindset and media output may range from outright dreary to doggedly determined and antagonistic this coming quarter. Falling as they do opposite the USA Sibly Sun (13°+Cancer), Mercury and Chiron here are likely to fan the flames of anti-government feeling. On a more positive note, the nation’s labor force (Mercury rules Virgo) may see more tangible benefits from their efforts (Mercury trines the 8th house Moon in Taurus). For instance, campaigns to raise the nation’s minimum wage may bear fruit (although again, every improvement may take more time than hoped for with Jupiter’s retrograde). The public mood should improve as these expected improvements unfold.

Venus conjoins Jupiter/Mercury midpoint. This aspect reinforces the importance of patience and pragmatism (especially in light of the Jupiter retrograde); again, this mindset (Mercury) should lead to eventual practical benefits (Venus).

Saturn (Sagittarius) continues its square to Neptune (Pisces).  For more about this ongoing aspect and its influence on recent events, please see previous posts (November 15 and December 2). In this chart the duo is placed in the 3rd and 6th houses respectively. Interestingly, Saturn and Neptune form no other major aspects here, but in mutable signs they will certainly enhance the influence those signs already wield in this chart. It seems they may form a sort of background “hum” of tension that will impact the mood of the nation via the media (Saturn in 3rd). Jupiter disposes Saturn (which lacks strength in Sagittarius), but Neptune is at its most powerful in Pisces and Jupiter co-rules Pisces with Neptune, so the public could be overwhelmed with a flood of media hype that effectively radiates the confusing influence of Saturn and Neptune throughout the entire chart.

We can already anticipate this will be true as Election 2016 enters its last 12 months, but military enlistment (6th house Neptune) will also be a focus—reinforced by this Neptune’s square to Sibly Uranus (also in the 6th). Certain other 6th house occupational fields such as healthcare could also be highlighted. It could be a tough flu season, as Neptune rules epidemics.

Of course, the public discourse regarding immigration and refugees will continue to be confused and distorted by the Saturn-Neptune square, which will make it difficult to settle upon coherent national policies. The square will be separating over the course of the upcoming quarter, but will still be within orb when the Sun enters Aries and ends this winter quarter. On the upside, the 6th house Neptune in Pisces may point to a public increase of compassion towards those struggling travelers (3rd house Saturn in Sag) seeking asylum in our midst.

Posted by Raye Robertson at 2:16 PM