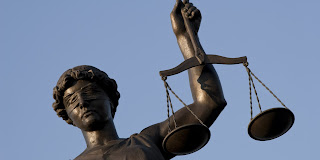 I like to live always at the beginnings of life, not at their end. We all lose some of our faith under the oppression of mad leaders, insane history, pathologic cruelties of daily life. I am by nature always beginning and believing…


It’s useful to remember that on average in this world, Americans have it pretty good. That goes for American women, as well, despite all the justified anguish over Brett Kavanaugh’s controversial, but likely-looking ascent to the Supreme Court. Even so, the situation simply oozes with the abuse of power, and has become, to my somewhat jaded eye, a no-win, tragically ironic situation.


Even if we ignore other women who have come forward with allegations, Dr. Christine Blasey-Ford testified quite credibly last week that she narrowly escaped being raped by Kavanaugh when they were both teenagers, yet those who are eager to confirm Kavanaugh are in power and they’re planning to vote him onto the Court tomorrow, come what may.


Trump pulled the illusion of a supplemental FBI background check out of his hat—an investigation in which the FBI wasn’t even allowed to interview Blasey-Ford and Kavanaugh, so he’s given the Senate Judiciary Committee the cover they need to confirm. In retrospect, the whole spectacle of Senator Flake demanding a week-long investigation starts to look like a sham. And, (update since this was first posted), Sen. Susan Collins' subsequent critical support for Kavanaugh completed the "kangaroo court" proceedings.


Here’s a quick look at the chart for today’s (Friday's) projected procedural vote at 10:30 a.m..  Notice how well-timed this vote is, if the goal is to marginalize women and their concerns. **(post-vote update: the vote was 51-49 in favor of advancing Kavanaugh's nomination to a final vote in the Senate on Saturday). 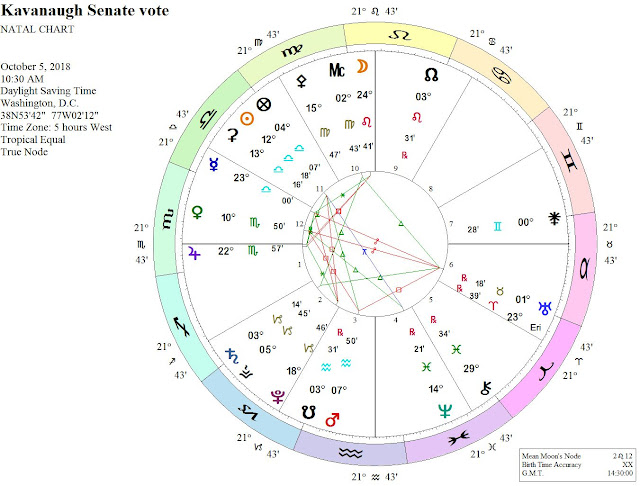 Jupiter (Scorpio) rises at the ASC (Scorpio); Pluto (Capricorn) and Mars (Aquarius) co-rule from 2nd and 3rd houses. Jupiter gains heft in Pluto-ruled Scorpio, and its ambitious growth agenda can act out in dark and unscrupulous ways in the wrong hands. Greed is a potential pitfall, but so is a vengeful spirit and the will to power over others. These dynamics are on full display in D.C., of course, but there’s also a lot of projection going on. They’re seeking revenge; no they are! The “sting” we’re all feeling with today’s deeply toxic partisan divide is certainly reflected here, as well.

There’s no coincidence that Venus (Scorpio) is kept stuffed away in the 12th house here, where she can protest all she wants, but she won’t be given her due. Unfortunately, this state of being ignored and denigrated (Sen. Grassley apparently told protestors to “grow up” this morning) only enrages people more, deepening the cycle of torment. Trump may have a vision for shaping the nation into his very own misogynist paradise (making American “great” again?), but how long will a Pluto-powered Scorpio Venus put up with that?

The 12th has been a convenient placement for Venus—it’s very interesting, actually, that Venus is about to Station Rx at 3:05 p.m. today!  So women will have that biblical 40 days and 40 nights to sort through what’s happened to them and regroup. Venus in Scorpio (that mythological seductive “Devil?”) falls over the Sibly 12th house, as well—this nation simply isn’t, by nature, equipped to deal in a balanced way with chthonic feminine power.

We’re far more capable, indeed, of dealing with Capricorn-style femininity: the ambitious, material-oriented force that balances the checkbook with one hand while keeping the wheels of commerce moving with the other. Women who tap into this spirit may also be quick to hold others responsible for the shortcomings of men in their lives--there's a certain jolt of power and control that goes along with that.

There’s a curious overlap between these two feminine forces here, however, that could influence today’s vote: in Scorpio, Venus is disposed by this commerce-driven Pluto, which is reinforced by Saturn’s strong presence in home sign Capricorn.

In fact, the Saturn/Pluto (midpoint, Capricorn) sextiles Venus and squares Libra Sun (Venus-disposed), so the points of authority and big business in this chart all tie back into Venus in some way. This has become all the more intense since Pluto stationed direct on September 30th at 18°+Capricorn. A conservative majority on the Court is something that the corporate world is undoubtedly thirsting after, for their own purposes, but what happens if they alienate their favorite consumers, women!!?
Even so, the move to hold entertainment royalty, Bill Cosby responsible for his history of sexual assault may have just struck a nerve and triggered a backlash. His is a story for another day, but the dynamics figure into why the “angry white men” on the Senate Judiciary Committee are defending their man in such shrill, victimization-laced terms.

This anger is reflected here in the Sun-Mars trine (Libra to Aquarius), which has been within orb throughout last week's hearings. The potent square we see here from the Saturn/Pluto midpoint to Libra Sun (and Sibly Saturn, for that matter) reflects the resistance from the American Bar Association, not to mention over a thousand law professors and judicial types against Kavanaugh’s nomination. As mythology loves to remind us, the sin of Hubris stinks to the gods—will the Senate push its luck and vote against so many voices joined in opposition?

They have their “Kavanaugh is a victim” narrative to help stiffen their spines, of course, and undoubtedly, the dominant fixed feel to this chart will also figure into the results: we have a fixed horizon, Moon (Leo), Venus and Jupiter (Scorpio) and Uranus (Taurus). Add to that a fixed T-square formed between the Nodal axis (Leo-Aquarius) square Uranus, and we can see how the fixed energies will fight to maintain the status quo in the presence of a demand for change (Uranus). Venus-ruled Taurus reflects how deeply invested women are in this change.

We are seeing a re-assertion of (especially white) male privilege under Trump, so despite a flood of resistance, the odds for overturning this privileged “frat boy” nomination are remote.

This makes the following all the more interesting: the MC-IC axis falls in mutable Virgo-Pisces, with Virgo Pallas (Justice) opposing Pisces Neptune. This could certainly reflect how nebulous and inconclusive the FBI’s supplemental background check on Kavanaugh has been. Yet, if the “higher angels” of Neptune are hovering around somewhere, perhaps some small concessions will emerge from this torturous process. Even a small crack in the fixed façade may catalyze change—we’ll have to wait and see.

In the meantime, what would First Lady Melania do? Oh, wait…she’s conveniently in Africa, in charge of making us look compassionate towards their women and children. Go figure!!

Those who support Kavanaugh, no matter what, (as Trump was supported by many), have his long, apparently distinguished judicial career to rely on, but his recent behavior has suggested that they will need the “man-is-a-victim-of-false-accusations” narrative for justification, as well. Unless they simply have no empathy for sexual assault victims--then, there's no problem pulling that lever. It would be unfair to judge what’s in anyone’s heart on this—the situation has unfortunately opened up a myriad of other excuses for voting yes: partisan obstinence, the upcoming midterm elections, the desire to de-fang the Mueller investigation before it gets to the Executive office, and so on.

Perhaps the most disturbing takeaway from all this, however, will be the long-term damage that’s being done to the Supreme Court, one of our most essential institutions. In a future post we’ll explore the role transiting Pluto’s excruciatingly slow return to our Sibly Pluto is playing in this degradation of the Court—and of Justice, in general, in this nation. For now, hold on to your hats—it could be a volatile weekend! 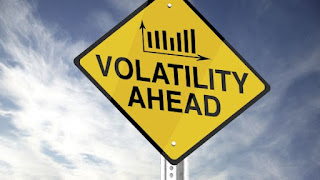 
She is also available to read individual charts—contact her at: robertsonraye@gmail.com.

Posted by Raye Robertson at 8:00 AM