Mars in Scorpio & the Showdown at the Malheur Wildlife Refuge

On January 2nd, a group of 300+ protesters marched through the streets of Burns, Oregon in support of Dwight and Steven Hammond, local ranchers convicted in 2012 of arson on federal land near their ranch. The father and son ranchers were sentenced to highly-controversial prison terms. A core group of the most dedicated protesters--all armed--then proceeded to occupy the Malheur Wildlife Refuge, approximately 30 miles outside of Burns.

Undoubtedly a well-known fact by now, the protests sprang from a Nevada ranch family’s dispute over grazing rights and other controls on federally-held lands. Ammon Bundy—the apparent spokesman for the protest—is the son of Cliven Bundy, a rancher who contests a $1 million grazing fee levied on him by the Federal Bureau of Land Management. Between the Bundy family and other BLM-disaffected ranchers, this fee dispute has blossomed into a much broader issue—federal v. local control of public lands. Long-story-short, Ammon Bundy and supporters decided to use their concern for the Hammonds to bring national attention to this broader issue, and at last word, they intend to occupy the refuge until the Hammonds are released and the Malheur refuge lands are returned to private land owner control.  The Hammonds—who turned themselves into the authorities as ordered on January 4—have disavowed any connection with the Bundys’ cause.

The protest is now entering its second week, and while action is supposedly being taken by local and federal authorities to end the occupation, the astrology shows that no easy solution will be found in the near term. For starters, by January 3, when news of the occupation broke, Mars entered Scorpio—a fixed sign that excels at the passive aggressive tactics the protest has adopted. According to Ammon Bundy, “the group has no intention of violence unless the government acts against them.”  The group claims it will leave if they are no longer welcomed by the local population, but direct requests to that effect from the Burns Paiute tribe—who consider the wildlife refuge lands to be their sacred territory—seem to have fallen on deaf ears.

Both the Feds and the protesters seem to realize that overt violence will not serve their purposes: no forcible move has been made by local law enforcement to disperse the occupation, to the chagrin of some; on the other side, a volunteer Pacific Patriot Network “security detail” armed with long rifles that materialized on Saturday the 9th to “de-escalate” the situation were asked to leave. Clearly, neither side wants to deal with the optics of bulletproof vests and military-style heavy-handedness. Subversive measures—the province of Scorpio—are more likely to be deployed. How the situation will be resolved and to whose liking is another story. Let’s examine the chart for the protest/occupation with an eye towards Mars’ Scorpio ingress as well (biwheel below):

Protest Capricorn Sun conjoins Pluto; both square Aries Uranus. Protest Uranus opposes Mars Ingress MC in Libra. Clearly, deep anger and resentment fuel this protest; the Capricorn energies suggest that resource control and financial concerns lie at the heart of the stand-off.  Indeed, the position of the Bundy family is that federal lands belong to the ranchers (even claiming they were stolen from them), and the stakes are high—in drought-prone states where cattle ranching is becoming less profitable, more land could provide valuable energy exploration leases as an alternative. The quest to acquire more land for lucrative fracking leases may ultimately be at the heart of this conflict. 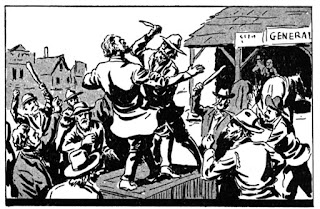 Aside from the environmental protection considerations, rolling back federal management of these lands isn’t universally desired:“… an analysis by The Oregonian/OregonLive shows that blowing up a century-old system of federal control over public rangelands wouldn't be a good thing for most ranchers in Harney County or elsewhere.” Protest Uranus opposite the Libra Ingress MC suggests that the group’s revolutionary intent will continue to evolve and consolidate its forces during Mars’ Scorpio transit (through early August, 2016).

(Both charts) Jupiter in Virgo conjoins the North Node and widely opposes Chiron in Pisces. This configuration undoubtedly feels like justification for the protest, which seeks to heal what the Bundy family and others view as an intolerable “wound” at the hands of the federal government. In fact, there is a deep wound that has festered between the private and the public domains in many fields (not just ranching), and if our political discourse is any indication, both sides are feeling it. Environmental activists who have a vested interest in protecting the wildlife refuge from private exploitation are feeling it; Oregon’s Native Americans (noted earlier) are also feeling the bandage ripped off old wounds here. With its tendency to blow imperfections out of proportion, Jupiter in Virgo anguishes over situations that feel out of whack or unjust.

(Both charts) Saturn in Sagittarius squares Neptune in Pisces. This ongoing, waning square in the November, 1989 Saturn-Neptune cycle undoubtedly emboldens the protestors when they insist that federal regulations and controls (Saturn) be challenged and dissolved. The broad, collective nature of this cycle reminds us that this issue is multi-faceted—again, one constituency’s hated controls are another’s welcome ones. Tying into the Jupiter-Chiron opposition via Jupiter’s rulership of Sagittarius, this aspect suggests that wounds and perceived injustices need to be addressed, but that we also need to broaden our vision to encompass all valid concerns.

Who are we as a nation?
Clearly, whatever happens with the Oregon protest, there will be ramifications for the nation as a whole. The conflict between federal and state/local authority over various aspects of American life could be considered the “primal” American conundrum. The conflict between government and private control of resources—and on the flip side, the responsibilities of each level for the nation’s wellbeing—is as old as the nation itself, and it’s only getting worse in this era of international trade agreements and their consequences (i.e., the ability of a Canadian company to sue the U.S. federal government over the aborted Keystone XL Pipeline project). It underlies the extreme polarization of our party politics; it drives our national discourse regarding energy and the environment, education, labor, human, civil and property rights, and so on. Indeed, the Oregon protest may provide a microcosmic view of the larger, macro-level power plays. With that in mind, let’s consider how the protest interacts with the nation’s Sibly chart (biwheel below):

Protest Sun-Pluto conjunction in Capricorn forms an inter-chart Grand Square, opposing Sibly Sun (Cancer) and T-squaring Sibly Saturn opposite Sibly Chiron (Libra-Aries). This intense cardinal grand square delivers clashing interests—all of which have a dynamic agenda at stake. Perhaps a most troubling prime example is the clash between the environmental concerns at stake on public lands and the energy industry’s desire to capture every last drop of oil from the earth beneath our feet. Challenging the public ownership of designated land reserves cuts to the heart of government itself (Protest Sun in hard aspect to Sibly Sun-Saturn). Who ultimately “owns” the land of this country and the resources it harbors? Who or what is responsible for protecting the environment on behalf of the nation’s citizens? What, for that matter, are the responsibilities of a nation towards its citizens and vice-versa?

Capricorn is, of course, inclined to support material achievement: in the case of this protest, the Capricorn playbook reads “more land for ranchers = more private sector fracking leases,” and if the protest successfully transfers control of protected lands to private control, the government’s hands will be tied regarding the environmental impacts of this shift. Ultimately, this case bears all the hallmarks of a Supreme Court-level issue.

Protest Mars in Libra trines Sibly Moon and squares Sibly Pluto. It’s easy to vilify the federal government these days—especially for those who stand to profit from less government regulation. Unfortunately, the “People” (writ large-represented by the Moon) are not likely to be the chief beneficiaries of the actions (cardinal signs) promoted by the Oregon protest. As we’re seeing so clearly in today’s political races, the public is easily swayed by passionate appeals to its sense of fairness and urge to freedom—represented here by the Protest Mars trine the Sibly Moon. Sitting quietly in the Sibly 2nd house of high finances, however, Capricorn Pluto is positioned (semi-sextile Sibly Moon, square Protest Mars) to co-opt that passion and leverage it for the greater benefit of Wall Street, the banks and the corporate sector. What appears to be a citizens’ revolt may quickly turn into a private sector “land grab,” to the detriment of public interests normally protected by government.

Protest Saturn in Sagittarius is poised to cross the Sibly Ascendant (12°+Sagittarius). The nation is already experiencing a major identity crisis—this transit will only deepen and highlight that crisis. As I’ve explored in other articles on this blog, the Saturn-Neptune dance is driving us to consider how serious we are about our stated national ideals (the “American Dream”) and about being a collective at all, as opposed to a massive stretch of territory filled with people who have no real obligation to anything beyond their individual self interests. Who or what do we want to be as a nation? Even more troubling, do we want to be a nation at all?

Pluto transiting opposite the nation’s Sun was bound to raise karmic questions, as well. This recent impassioned statement by tribal elders of the Burns Paiute tribe reported by NPR says it all:

With the armed occupation of a federal wildlife refuge in Oregon in its fifth day, a local Native American tribe says the militants are "desecrating sacred property."
Oregon Public Broadcasting's Amanda Peacher tells our Newscast unit that Burns Paiute tribal leaders denounced the militants and demanded that they leave. "The 190,000-acre wildlife refuge is within Paiute ancestral lands," Amanda says.
Tribal Chairperson Charlotte Rodrique says that she is "offended by occupiers' statements about returning the land to its rightful owners," Amanda reports.
"You know, who are the rightful owners?" says Rodrique. "It just really rubs me the wrong way that we have a bunch of misinformed people in here — they're not the original owners."
According to Paiute story and legend, the tribe has lived in this area since "before the Cascade Mountains were formed."

Posted by Raye Robertson at 5:32 PM No comments: