It is the business of Neptune and Pluto to infuse humanity’s worldview with a cosmic perspective. This duo reminds us that life does not begin or end with our pitifully small physical existence on this planet, and that we are enmeshed in a tapestry of cosmic energies that challenges the imagination. It reminds us that, despite appearances, we are literally “one” with the Universe. We can accept the awesome spiritual implications of this, but we can also choose to see it all as merely the astrophysical facts of our cosmic existence. As science has expanded its horizons, we have expanded ours, realizing finally that we are made of the same stuff as stars; in this holistic universe, we are each individual microcosms of the vast astrophysical macrocosm; we are each “parts” that contain and reflect the “whole.” Even without the spiritual implications, this is awesome, indeed.

The sign in which these two plant their cosmic seed for the coming 492+ years provides a broad theme for this evolving perspective, but in fact, the 1891 cycle (beginning on August 1, 1891 at 8°+ Gemini) is the second of three Gemini cycles (see chart below). The first began in 1398—the onset of what is generally considered the Renaissance in Europe. Neptune and Pluto’s influence develops over very long stretches of time, modified and implemented by the remaining outer planetary cycles bracketed within their embrace. A complete Neptune/Pluto tour through a sign, encompassing three sub-cycles in that sign, takes roughly 1426 years—a respectable chunk of time, in terms of civilizations, though a blink of the eye in geological terms. Thus, these two seem more concerned with transforming the superstructures of societies and cultures than with mere “trends” within them.

For instance, the Persian prophet Zoroaster’s (630-553BC)[1] conception of time as linear, with a beginning and an end (formulated sometime near the 579BC Neptune/Pluto conjunction), has influenced 2,000+ years of Western culture’s preoccupation with an impending Apocalypse. The forces that colluded to produce apocalyptic movements both past and present all hark back to this time.[2] —i.e., in the Middle Ages, during the run-up to Y2K, with the coming so-called Christian “Rapture,” and with the pernicious messianic/apocalyptic ideology promoted by ISIS.

In keeping with their long orbital cycles, Neptune and Pluto are, indeed, concerned with the long-term survival of our species. They are thus more concerned with long term civilization building than with any one regime (i.e., Conservative over Liberal) within that civilization. Definitely in keeping with this long-term perspective, some historians feel that the Black Death plague of the late 1300s (approaching the 1398 conjunction) actually laid the groundwork for the European Renaissance that would soon take shape (jumpstarted by Neptune-Pluto’s 1398 conjunction). This cool, detached perspective offends our moral sensibilities with its disregard for individual destinies, and not surprisingly, most mundane astrology studies focus on the narrower, more accessible social and collective level ruled by Jupiter, Saturn and Uranus. Still, I would advocate paying more attention to the Neptune-Pluto cycle because it’s very relevant to current collective developments. More on this in a future post.

Now appearing on the mindscreen of humanity…

Neptune and Pluto are concerned with the ideas that very slowly materialize on the “screen” of our collective consciousness, like photographic images once developed (before we went “digital”)  in a bath of chemicals. This developing process amounts to the formation of our consensus reality, and Neptune and Pluto (by way of analogy) seem to provide that “bath” into which all the energies of the solar system are dissolved. The “big ideas” embraced by humanity depend upon this chemistry: for instance, our view of humanity’s place in the universe.

During the 1398 Gemini cycle, the work that Copernicus, Columbus, Galilleo and Kepler did to refute the Roman Church’s ideology-oriented model of a geocentric universe was one such idea. The ascendancy of the “Big Bang” theory during this present Gemini cycle is of the same magnitude; interestingly, some scientists feel that Big Bang proponents have framed their theories not around empirical evidence, but around an unspoken, religiously-grounded assumption that a creative “moment” from which all the matter of the universe sprang at once was necessary. Neptune seems to rule the ideological filters we project into reality, so it’s anyone’s guess if we’ll ever be able to conceive of our “place” without such a filter. If the present stand-off over Climate Change has taught us anything, even a preference for empirical evidence can be construed as a filter of sorts.

Despite this persistent tension between scientific observation and abstract/dogmatic theorizing (a Gemini/Sagittarius dilemma), technology and scientific exploration have been driving forces during both the 1398 and now, the 1891 Neptune-Pluto cycles. Max Planck’s quantum theory and Albert Einstein’s theory of relativity (1900/1905 respectively) helped usher in the 1891 cycle, and have offered promising possibilities for uniting science and spirituality (a perk with Neptune in Gemini).

The balsamic phase is a climactic period when the best and worst extremes of a cycle manifest. In the case of Neptune/Pluto, these can be dramatic, testing the very survival of the collective, along with its ideas and ideals. The balsamic period leading into the 1398 cycle certainly did: the Black Death plagued Western Europe for the last 50 years of it. On the upside, there may also be a flurry of inventiveness, as seeds are planted for a new round of development. Through a typical weeding-out process, some features of life simply become outmoded.

The 1398 cycle entered its balsamic phase in early 1854, when Neptune—strong in its ruling sign of Pisces (as it is today)—moved into a 45° aspect with Pluto, which had recently entered Taurus. Pluto was already stimulating not only the deep divisions over slavery and states- v. federal-rights that resulted in the American Civil War (1861-65), but the simultaneous rise of the new industrial class)—the so-called Robber Barons. These predecessors of today’s billionaire class included such figures as Andrew Carnegie, Leland Stanford, Colis Huntington, Jay Gould and J.P. Morgan, who made their fortunes primarily in railroads—supplying, building or financing them.

Speculation in U.S. railroads (Jay Gould was a ruthless manipulator of stocks) spawned a financial crisis throughout Europe in 1857; waves of immigrants reached American shores during this period, providing a workforce for the massive business enterprises taking shape and soldiers for the War (mostly for the North). Needless to say, the Civil War was good for business.

By splitting the U.S. into two warring factions, the Civil War provided a triangulated, Gemini-style “shell game.” The two sides of the slavery issue were played against each other for the benefit of a third party—business. Those sincerely advocating the abolition of slavery had a valid quest: they tested the U.S. commitment to freedom and equality for all, and amazingly, a major segment of the U.S. population was at last officially redefined as “fully human,” not mere property. Endowing these new humans with full human rights was left for the following century. In retrospect, however, historians know that economic ambitions and disputes over the roles of state and federal governments did more to fuel the Civil War than humanitarian sentiments.

In the U.S., money ran like blood during this Neptune-Pluto balsamic phase—government spending for the Civil War had stimulated the northern U.S. economy, and after a short post-war panic and depression, business was booming again. The railroad moguls continued to profit mightily from the big dreams of investors and the “vision” of a nation stretching from sea-to-sea. Jupiter supported this Neptune-Pluto agenda nicely as it toured through Pisces from 1867-68. The two branches of the Transcontinental Railroad were joined at Promontory Point, Utah, in 1869. The West, rich in natural resources and wide-open spaces, was open for mass settlement and exploitation.

During the 1860s, the federal Homestead Acts (providing nearly free tracts of land) enticed hundreds of thousands of people to move westward and settle; Indian territories were an inconvenience to be overcome. This expansionism was justified by the official U.S. doctrine of Manifest Destiny (a deeply Neptune-Pluto phenomenon, I would argue). This incredible mass movement of settlers [3]

reduced millions of Native Americans to the status of caged animals at best. The U.S. military followed the settlers, creating outposts and conducting campaigns to protect the settlers’ interests and repress Native resistance as necessary. Machiavelli and his philosophy—“the ends justify the means” (a product of the 1398 Neptune-Pluto cycle)—informed Manifest Destiny and its bloody outcomes. The tragic Battle at Wounded Knee in 1890 marked the year the U.S. Census Bureau “recorded the disappearance of a frontier of settlement.”

Neptune and Pluto rule oil and mineral extraction, and not surprisingly, speculation on all of these industries took off in a big way during this balsamic phase, paving the way for the U.S. rise as an industrial power. John D. Rockefeller founded the Standard Oil Company in 1870, laying the groundwork for the automobile industry about to be born. German inventors Carl Benz and Gottlieb Daimler refined the gasoline-powered engine, and the first Benz-Patent Motorwagen was shown publicly on July 3, 1886 . Notice that the Node for that seminal event anticipated the 1891 Neptune-Pluto conjunction (see biwheel below).

In the U.S., Henry Ford took up the charge in the new cycle, completing his first car in 1896 and founding the Ford Motor Company in 1903. In April 1913, with Saturn (2°+Gemini) trine Uranus (7°+Aquarius) and Pluto still in Gemini, he rolled out his assembly line mass production process,[4] which ultimately revolutionized industry (some say 20th culture) in general. Suffice to say, seeds were planted during this balsamic phase for most of the major technological developments that took off early in the 1891 cycle.

Machiavelli lives…
Looking back, we can see how this industrial rise set the stage for the Gemini-style duplicity that continues to place the U.S. (and other nations) on the road to war. “War is good for the economy” is an idea—another offspring of Machiavelli’s famous “ends-means” dictum—that has been cultivated in our consensus reality throughout this present Neptune-Pluto cycle. We rarely speak such Plutonian ideas out loud, of course—“bringing democracy” to an oppressed population is more palatable. Even Neptune and Pluto may be tiring of this increasingly transparent smokescreen, however. Transiting Neptune’s current waning square to its 1891 conjunction point with Pluto may well underlie the difficulties we’re faced with these days:  migration crises, epidemics, terrorism and climate change, for starters.

Clearly, there’s more to this Neptune-Pluto “summit of the gods” than meets the eye—especially in this critical election season. The entire chart for the event is illuminating—we’ll examine it more closely in the next post! 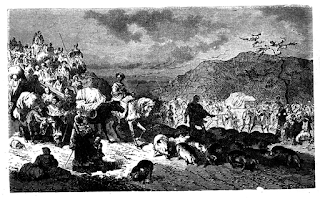