I was reminded of a freaky convergence of events recently, while watching an episode of Dr. Who on my Netflix-enabled “telly.”  The episode had a distinct “Halloween” vibe to it, with witches and monsters (and Shakespeare!) and an interesting “words are power” theme. This alone was an interesting coincidence (Halloween being just days away), but digging a bit deeper I realized there was something more astrologically significant about Dr. Who and the times we’re inhabiting.

For starters, as Dr. Who aficionados may know, the BBC TV series was first broadcast on November 23, 1963—the day after the assassination of President John F. Kennedy on our side of the pond. In fact, according to Wikipedia, the series’ first episode was delayed 80 seconds from its scheduled launch of 5:15 p.m. GMT due to the news coverage of that tragic event.

Fast forward to 2015, and many “Doctors” later, Dr. Who is still parking its “TARDIS” in new times and dimensions, and America is once again in turmoil. Mundane astrology is always seeking out the planetary echoes between time frames because those links help us envision the way forward, so a little astro-time travel seemed in order.

Hop on board…1963 to 2015
The link between these time frames, in fact, is contained in two key outer-planetary cycles that echo loudly today: between Saturn and Neptune, and between Uranus and Pluto. As the biwheel below shows, the resonance between today’s planetary “heavies” with that troubling period of late 1963 is a little too close for comfort, and we might need more than the Doctor’s “sonic screwdriver” to set things right.

Key highlights linking the Kennedy assassination (and Dr. Who) period with today (cast for Halloween 2015) include:

Uranus-Pluto (Virgo) are nearing conjunction in 1963; Uranus-Pluto (Aries-Capricorn) are square in 2015. Radical, transformative action has been the hallmark of this duo’s cardinal square, within orb (with some variations) from 2010 till now, but the changes that have been wrought were seeded in the 1960s with the new Virgo cycle (1st exact in 9/1965). In the 1960s, Uranus and Pluto were completing the balsamic period of their very tumultuous June 1850 cycle, during which the U.S. Civil War was fought and Abraham Lincoln was slain, making the 1963 assassination of John F. Kennedy all the more significant—and resonant. Leaping forward, as president from day one of the current square, President Obama has inspired a similar type of rage in those who fear or distrust what others’ civil rights and racial/economic justice means to them. Amazingly, a new “secessionist” movement that echoes that 1850s-60s period is also making noise.

Saturn squares Neptune in both charts: Aquarius to Scorpio in 1963; Sagittarius to Virgo in 2015. Both are waxing phases, but in different modes, the first being in fixed signs and the second in mutable. Accordingly, the first pairing represented resistance to change in matters such as civil rights and women’s rights, seen in the 1960s. Kennedy was branded a Communist and an Anti-Christian (see “Wanted for Treason” flyer, right) 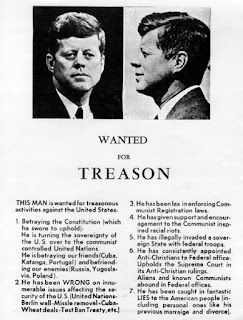 by those opposing these movements and the changes they brought with them at that time. This troubling flyer was reportedly circulated the day before Kennedy was killed. Waxing phases—especially during the stress points—are notable for stimulating action; violent action—especially of a darkly conspiratorial, explosive type—fit the Aquarius-Scorpio square in 1963.

Mutable Saturn-Neptune squares can be overwhelming for the scope and nature of change involved, especially—as  in 2015—when all hell seems to have broken loose with our stable reference points (gender, race, national borders, you name it), causing many to feel the very philosophical/religious, social, national (Saturn in Sag) ground they stand on is up for grabs.  Chaos rules (Pisces) and nothing makes sense anymore to the less adaptable among us, which is wildly disconcerting.

In fact, what we’re experiencing now also builds upon the late 1970s mutable Saturn-Neptune square in Virgo-Sagittarius, when the concept of Globalization was first openly discussed. At that time, global economic, technical and communications barriers were quickly eroding, seeding the postmodern, computer-driven “information age” we have experienced ever since. Arguably, this “flattening” of the world has had a lot to do with the turmoil we’re seeing regarding civil rights and economic justice (a story for another day).

2015 Saturn (Sagittarius) squares 1963 Uranus-Pluto (Virgo); 2015 Neptune (Pisces) opposes 1963 Uranus-Pluto, forming an inter-chart T-square. Talk about time travel—while it’s a Sci-Fi truism that travelers from the future should not meddle with the past (so say the Doctor and “Doc Brown”), there’s no stopping the past from influencing the present! In other words, Saturn and Neptune today are revisiting issues raised in the 1960s social revolution.

In Virgo, the 60s agenda was about taking a pragmatic approach to making deep, revolutionary change. Eliminate barriers to voting and other civil rights, check; pass anti-discrimination laws, check; promote women’s rights with reproductive freedom and improved roles in the work force, check; get out of Vietnam, ban the draft and stop entangling ourselves in other countries’ civil wars, check; “Turn on, tune in, drop out”…question authority, check. Trouble is, we’re still struggling with all these issues, in one way or another, and who knows what we’ve learned from past struggles:

Many states have reinstated barriers to voting rights. Broken immigration and law enforcement systems ensure that discrimination lives on. Planned Parenthood—many women’s access to reproductive health care—is threatened with defunding, and women’s wages are still 70-some percent of men’s wages for comparable work. We’ve been trying to withdraw our military from the Middle East (the new quagmire), but keep getting sucked back in. The military is increasingly controlled by private corporations with profit on their minds, and yes, we’re about to deepen our involvement in the Syrian civil war, entangling ourselves with Russia as we go.

Last, but not least, several states have found that by legalizing pot and extending government control over this lucrative cash crop, they can pay their bills. All well and good, but aside from this, “Government” is a dirty word, especially where access to guns is concerned. Everything old is new again…and again…and again.

Uranus & Pluto have the final word…
Today’s Uranus-Pluto square is not simply echoing the 1963 Kennedy chart—it’s banging the gong loudly, with 2015 Pluto tightly conjoined the 1963 South Node (Capricorn) and 2015 Uranus square the 1963 Nodal axis, creating another powerful inter-chart T-square. This configuration brings us back to the “anti-government” sentiment rocking U.S. politics—especially as 13°+Cancer (the 1963 North node) is also the U.S. Sibly chart’s Sun degree (see Triwheel below)!

The Sun in a national chart represents both the Nation itself, as an astrological entity, and the Chief Executive, so the 1963 chart’s nodal axis being stretched across this degree when Kennedy was assassinated was certainly a moment of “destiny” for both him and the nation. If we had a real-life TARDIS, what moment of destiny in this nation’s history would we hope to change?

Perhaps that’s the question posed by today’s Pluto and Uranus conundrum—and this modest time travel fantasy. Does history have to repeat itself, if we refuse to go along for the ride? Happy Halloween! 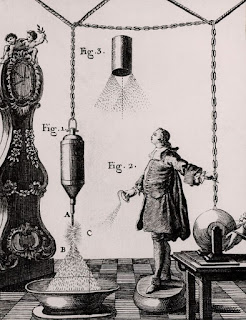 Raye Robertson is a practicing astrologer, writer and former university English instructor. A graduate of the Faculty of Astrological Studies (U.K.), Raye focuses on mundane, collective-oriented astrology, with a particular interest in current affairs, culture and media, the astrology of generations, and in issues of public importance such as education and health. Several of her articles on these topics have been featured in The Mountain Astrologer and other publications over the years. Raye can be contacted by comment here, or at: robertsonraye@gmail.com.

Posted by Raye Robertson at 6:14 PM No comments: