As astrologers know well, timing is everything when it comes to events of global importance. The Pope’s visit to the U.S. was exquisitely timed to coincide with not only a critical time in U.S. politics (on the cusp of a new election year), but with the 70th anniversary of the United Nations and with the September 25-27 (Super Moon!) U.N. Summit for the Adoption of the post-2015 Agenda, where the hot topic will be global sustainable development goals—a concern the Pope eloquently expressed in his speech today at the U.N.

There’s so much more to consider in all this (see earlier post about the Pope's chart itself), but for now, a few astrological observations about the Pope’s historical visit to Congress. Because his stated intention was to speak to the country at large, through our representatives in Congress, we’ll examine the U.S. Sibly chart and the chart for the Pope’s visit to Congress for the biwheel (see below):

·       Pope’s Visit Sun conjoins Sibly MC. The Pope is clearly the “man of the hour” with a serious message for the nation about its responsibility and role in the world.

·       Visit Mercury in Libra conjoins Sibly Saturn, squares Sibly Sun in Cancer. The Pope’s message is seen being literally delivered to the halls of Congress (Saturn) here, but his message is also directed to the larger nation and the Executive (Sun). The Pope made several pointed comments about the perils of extremism, polarization and “a simplistic reductionism which sees only good or evil; or if you will, the righteous and sinners.” Quite appropriate for this Mercury in Libra—and for the ears of Congress!

·       Visit Jupiter in Virgo opposes Visit Neptune in Pisces; Visit Jupiter sextiles Sibly Jupiter; Visit Neptune trines Sibly Jupiter and Venus. These may seem like “soft” aspects, but Visit Jupiter opposite Neptune created a spiritual context and elevated the tone of the proceedings. As one reporter put it, there was an air of “reverence” in the chamber that he had never witnessed before. Jupiter and Neptune together speak to the “common good,” a guiding principle for the Pope that our economic/political system tends to sweep under the rug. The “softness” of the Visit aspects to Sibly Venus-Jupiter reflects the proverbial “velvet glove” with which the Pope delivered some pretty harsh criticism—on the issue of the U.S. role in the global arms trade (“… money that is drenched in blood, often innocent blood”), on the need to direct business efforts differently (“a noble vocation…especially if it sees the creation of jobs as an essential part of its service to the common good”), and on the many ways economic justice falls short. The Pope poked at open wounds in Congress and the nation as he promoted the reciprocity of the Golden Rule (Venus-Jupiter-Neptune) in regards to today’s refugee crisis and to other immigrants knocking on our doors: “…most of us were once foreigners…We must not be taken aback by their numbers, but rather view them as persons, seeing their faces…” The need to better balance human and financial interests was a constant theme.

·      Visit Mars and Venus in Leo oppose Sibly Moon in Aquarius; Visit Mars falls inconjunct Sibly Pluto in Capricorn. This potent, fiery Mars befits the strength and courage of the Pope’s message; Venus in Leo reflects the affection with which he delivered that message. The American people’s response (Sibly Moon) has been all over the place, as might be expected, but if Pope “bobble-head” sales are any indication (clearly we’re not getting his anti-consumerism message), many were impressed by his warmth and the aura of leadership he projected (Mars in Leo). The Leo-Capricorn inconjunct suggests the Pope’s speech rattled some cages on high—especially on Wall Street. He does, after all, promote adjustments to the capitalist system (Pluto), with the aim of making the economy more sustainable for all concerned—not an easy sell.

·      Visit Saturn in Sagittarius sextiles Visit Sun in Libra-Sibly MC and opposes Sibly Uranus in Gemini. Clearly, the timing of the Pope’s speech allowed him an amazing teaching (Saturn in Sagittarius-Uranus in Gemini) opportunity, and early comments suggest that the lessons are resonating with American public consciousness (MC). Scientific studies have failed to impress, but the Pope’s ethical spin (Sagittarius) on scientists’ warnings about climate change show signs of hitting home.

·      Visit Moon in Aquarius trines Sibly Uranus in Gemini; Visit Uranus in Aries opposes Sibly Saturn and square Sibly Sun. The Moon aspect fits the almost clinical, matter-of-fact style the Pope adopts in his speeches. With Uranus disposing this Moon, it’s clear that the Pope spoke with an authoritative voice and delivered a clear call to action that will perhaps set some action in motion during the months remaining of the current Uranus-Pluto square (Aries-Capricorn). This harsh cardinal square has promoted polarization and extremism, of course, and we can sense that with his critique of the arms trade and with many comments he made in his speech to the U.N., the Pope is frustrated with the inability of regional stakeholders to resolve Middle East crises and to avert the tremendous human suffering we’ve been seeing with the refugee crisis.

·      Visit Uranus in Aries conjoins Sibly Chiron and trines Visit Venus in Leo. Here we see that the Pope’s visit was clearly a call to action—action that works to heal the planet we have helped to wound and works to elevate our consciousness in regards to humanity and human relationships.

The Pope’s speech to the United Nations, delivered this morning, was an exhaustive deepening and broadening of the themes touched upon with Congress; however, there’s an inner consistency in both messages that speaks to the gravity and focus of this dedicated human being. Please feel free to add your observations on these charts and the amazing times we’re witnessing!

On September 23, 2015, Pope Francis I (affectionately known as Papa Pancho) brought the core messages contained in his remarkable encyclical (Church teaching document), Laudato Sí, to a joint session of Congress—an unprecedented event hosted by Speaker of the House John Boehner (more about him to come!). Perhaps a gesture meant by Boehner to appease the GOP’s conservative base and justify a government shutdown over Planned Parenthood, the invitation offered the Pope a much broader teaching moment. He made the most of the opportunity to address Congress (as he put it to a standing ovation), “in the land of the free and the home of the brave.” His message was at once gracious, positive and hopeful, fatherly, critical and admonishing, and his call for moral leadership and responsibility towards humanity and the environment far exceeded the narrowly-defined conservative “family” agenda.

Not surprisingly, both the Pope’s encyclical, his speech to Congress and his subsequent address to the United Nations on September 24th reflect the intellectual breadth and spiritual depths of the man we’ve come to know these past few days. Astrologers would argue they also reflect the power and substance of his birth chart, which is, thankfully, available at Astrodatabank.com, with enough documentation of his birth data to garner a Rodden AA rating (birth certificate/record in hand).  Let’s consider some highlights (see chart below):

·       6th house Sun at 25+ degree Sagittarius, conjunct North Node and opposed to Chiron. Clearly destined to serve others as a teacher, Pope Francis has a soaring intellect well-suited to the calling. He has taught many disciplines since he joined the Jesuits and began his own studies for the priesthood in 1958. Chiron’s opposition produces a deeply introspective nature and an intense wound to self and ego; the Pope’s humble, self-effacing persona is perhaps reflected here.

·       Cancer rises at the Ascendant, trine Saturn in Pisces and opposed by Jupiter-Mercury conjunct in Capricorn. The Pope radiates active pastoral energy with this cardinal Cancer Ascendant. His benevolence, however (most obvious when he interacts with children) is infused with both pragmatic and spiritual ideals (Capricorn-Pisces) that move him to actively serve others (6th house Jupiter, 7th house Mercury in Capricorn, both disposed by 9th house Pisces Saturn). As we’ve witnessed this week, he serves through his actions and by his demanding, spiritually-grounded message of compassion and responsibility.

·       The Moon (chart ruler) conjoins Venus in Aquarius and trines Mars in Libra. The Pope’s loving concern for humanity is certainly reflected here, and the trine to Mars reinforces his calls to action. His recurring focus on families as the backbone of societies can be seen in Mars’ 4th house placement. Even though he hews to the church’s conservative teachings about family and marriage, the more open-minded, less judgmental perspective he has taken publicly on divorce and homosexuality (saying, “who am I to judge?”) is perhaps reflected in his 9th house Uranus in Taurus disposing the Aquarius placements. This is especially notable as Venus squares and falls in mutual reception with this point. There is  “revolutionary” potential here, suggesting that women might still hope for change in the roles they are allowed to play in the Church under this Pope’s tenure.

·       Mercury-Jupiter in Capricorn trine Uranus in Taurus. Here we can see the strength of conviction that underlies the Pope’s courageous, but not always popular, views on social and economic justice and environmental challenges. Both his encyclical and his speeches to Congress and the U.N. expressed how interdependent he believes these issues are. The Pope captured this ideal in his speech to Congress by referring to the figure of Moses present in that chamber. The role Moses played with the Israelites certainly resonates with the Pope’s chart as well: Moses, he said, was both the ideal “patriarch and lawgiver” (Jupiter in Capricorn) and the bridge (Uranus trine) between God and the People that spoke to the “transcendent dignity of the human being” (the highest expression of these placements in Taurus-Capricorn). The urgency of caring for “our common home” by taking responsibility for the wellbeing of the planet is another constant theme in the Pope’s teaching—also not hard to see in these powerful earth-sign placements. Capricorn evokes both the regulatory and conservation impulses of Saturn; Taurus also preserves and celebrates the material dimension of life on this planet. Uranus here explains the Pope’s concern for putting technology “at the service of another type of progress, one which is healthier, more human, more social, more integral.” This line was only one of several in his speech that were first seen in his encyclical.

·       Saturn in Pisces opposes Neptune in Virgo; both form a T-square with Chiron in Gemini. There’s a lot to unpack here, but the overall configuration evokes the deep sense of spiritual vocation the Pope embodies. It suggests a wound-driven need to make spiritual sense of material life, to take responsibility for the wisdom gained, and to communicate that wisdom for the sake of humanity. Even though many public figures and celebrities were born with Chiron in Gemini, this placement often represents a wound to our communication abilities (or at least the feeling that we’re not getting through to others); clearly the Pope has not allowed that to deter his efforts.

·       Chiron in Gemini trines Mars in Libra. This upbeat aspect points to the vibrant internal reserves of energy that power the Pope’s daily life and agenda and reflects his active concern for social justice.

What do you see in Pope Francis' chart? More to come on the Pope's visit to Congress! 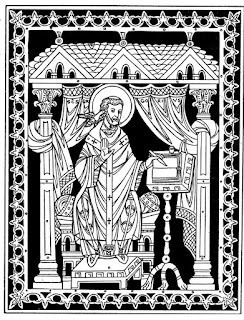