The more Trump's poll numbers defy gravity, the more lavish the adjectives used to capture the essence of Donald Trump and his appeal. He’s an “alpha male, tapping into our hunting DNA” says one; he has “comedic sense” with how he times his insults, says another; his language skills serve him well; he attacks naysayers with “visceral” ruthlessness; he’s playing “3D chess,” when his opponents haven’t even found the board, but he’s “sophomoric;” he’s an egomaniacal bully—not even an adolescent, but more fit for the “sandbox,” and so on. Reportedly, there’s even a new “study” springing up regarding this candidate’s enigma… you guessed it, “Trumpology!”

Despite all of this, however, no one seems quite sure if—on the flip side of his blustering routine—there’s a serious presidential contender. How about a little Astro-“Trumpology?”

A full-blown chart reading is beyond our scope here, but a few key highlights say a lot:

·         Gemini Sun conjunct Uranus, disposed by Mercury in Cancer. This combination speaks to Trump’s prodigious language “skills,” and they are skills of a sort, as he can deploy them when needed to achieve a purpose. As ruler of his Sun, his Cancer Mercury supports the defensive “pre-emptive strike” mode Trump adopts when challenged: he knows instinctively (Cancer/Moon) what his audiences want to hear and he delivers. Why they want to hear what he delivers is another story, entirely.

·         Sun -Node-Uranus stellium elevated in the 10th house; the entire stellium falls trine Jupiter in Libra. These amazing energies capture the conundrum Trump poses to our times: is it possible to be the grandest blowhard out there, and still work for the wellbeing of our society instead of against it? Possible, but oh, the pitfalls. With his Node sandwiched between this whopper Sun-Uranus, it’s not surprising Trump feels entitled to be head honcho on the world stage, and that he expects people to just trust he will “know” (Uranus = “eureka” insights) what to do about all issues when the time comes. With this stellium trine 2nd house Jupiter in Libra, it's possible Trump’s simplistic “build a wall” answer for everything sounds fair and just to people who are simply tired of everything being so complicated.

·         Full Moon type – 4th house Moon opposes Sun from Sagittarius, trines Mars at the Leo Ascendant. All this fiery energy supports Trump’s inflated (Jupiter rules his Moon) sense of entitlement. With his Ascendant at the critical 29th degree of Leo, he has all the finesse of a fire-breathing dragon, but with Leo rising and a 10th house Sun, he’s the boss, so get with it, or you’re fired!

·         12th house Mars in Leo conjunct 29th degree Leo Ascendant and square Taurus MC. We can certainly see the “bully” potential of this configuration because this Mars plays hardball and will not be denied his day in the Sun. “Might is right,” with this energy—whether financial, verbal or military might. Mars square the MC suggests a challenge with anger management, but this is hardly a problem: Leo knows anger has its uses and deploys it strategically in the service of destiny (MC).

·         Taurus MC disposed by 11th house Venus in Cancer; Venus and Saturn conjunct in late Cancer and inconjunct the Moon. This array certainly fits Trump’s tendencies to dig his heels in (no apologies needed) and launch his hair-trigger defenses at the slightest affront. A Taurus MC clearly wants to be accepted (read “a winner”) and noticed (witness the Trump Towers built all over the country). Hence, his instinctive (Cancer/Moon) attacks on the looks and prowess of others (critics are all “losers”) and a defensive rhetorical style (Cancer Mercury). Interestingly, a Taurus MC is perfect for a builder, and his Cancer Venus/Saturn are great complements, for building the ultimate secure homeland. It’s no mystery why “walls” solve so many problems for this builder.

·         Mercury square Neptune in Libra. Never underestimate the power of denial and obfuscation. Trump’s telling retort when challenged for his brutal name-slinging—“Why should I apologize if I’m not wrong?”—speaks perfectly to Mercury and Neptune’s “Mad Hatter” subjectivity. Whether we would be well-advised to elect Trump as negotiator-in-chief or not (Rand Paul’s concern, expressed in the 2nd debate), yes Trump probably could negotiate with Putin—another master of denial and obfuscation (Mercury conjunct Neptune!). Trump claims he would probably get along with Putin, which makes sense here, as long as they don’t trip over each other’s illusions!

·         Pluto in Leo in the 12th. Trump’s Pluto is not only hidden away in the inscrutable 12th, but it also forms no major aspects, which makes it even more compelling. With a Cancer cusp, Pluto in Leo here guards the ego survival needs of the Sun (ruling Leo) like the mythical dragon guards his treasure. A deep-rooted survival anxiety and need to live forever—in some concrete form—dominates this house. Mars on the Ascendant could have added fuel to this anxiety at birth; let’s leave that for therapists to ponder.

So, what are the odds that Trump is a serious presidential contender for 2016? Based on what we’ve seen in his chart, I’d say a Trump nomination is not as inconceivable as the outraged pundits might wish. His chart and the U.S. Sibly chart (one of the nation’s recognized founding charts) connect in several telling ways, in fact. A quick review follows (see Chart below): 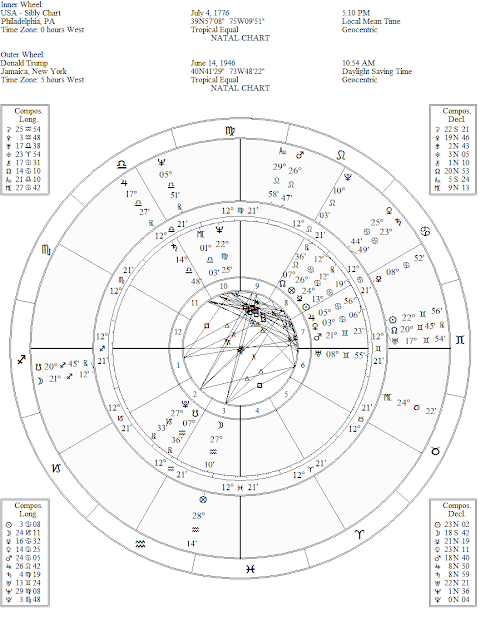 ·         Trump’s Venus-Saturn in Cancer conjoin Sibly Mercury and oppose Sibly Pluto in Capricorn. Trump crows about his billions every chance he gets (2nd house Jupiter and Neptune chime in here, too). Whereas lesser mortals couldn’t get by with strutting around the barnyard like Trump does, a lot of his supporters would like the U.S. (and its president) to do more strutting on the world stage, so the exercise serves him well, despite the mock media outrage.

·         Trump’s Sun-Node-Uranus opposition to his Moon forms a t-square with Sibly Mars in Gemini, square Neptune in Virgo. Trump’s passionate (full Moon) quest to restore “American greatness” through military (Mars) means may be more than bluster, seeing how his chart taps into the nation’s delusion-prone Mars-Neptune square so tightly. U.S. Fossil fuel (see Neptune connections below) and Defense industries will be humming again—ah, the return to “greatness.” Unfortunately, Mars-Neptune also assures that we have repeated national memory lapses: We seem to forget that we didn’t become “great” again in Vietnam, Iraq or Afghanistan, and Iran would be just more of the same, only worse. Better to have an alligator-wrestling contest with Putin and call it a day.  Nevertheless, the worn-out “return to greatness” war cry garners votes, and with Sibly Mercury (opposing Pluto in Capricorn) disposing Gemini Mars, Wall Street has the champagne bottles cooling as we speak.

·         Trump’s Jupiter and Chiron in Libra conjoin Sibly Saturn and square Sibly Sun. This configuration points to a dilemma regarding Trump’s values and intentions: is he seeking the presidency because he deeply values such service (2nd house Chiron), or would the presidency feel more like a desirable acquisition to him (2nd house Jupiter)? Either way, the “checks and balances” built into the federal government would likely feel too rigid and confining to Donald Trump, Executive-in-Chief.  Congress and the Supreme Court (Sibly Saturn) might not be amused. Considering the “magical” connections his Jupiter enjoys (conjunct Chiron, trine Sun-Node-Uranus), however, capturing the presidency—on his own terms—is not as outlandish as it may seem.

Finally, a quick takeaway:  the astrology seems to suggest that with Trump, our electoral process is being redefined as we speak—heavy on the entertainment value; light on political substance—politics as “reality TV.” Sound bites and tweets, packaged for mobile consumption, and no holds barred—the dignity of public service rendered a quaint throwback. Just a few election cycles ago, then-Democratic nomination seeker Howard Dean was shut down overnight for simply howling with enthusiasm at the podium. It seems today, with the stakes higher than ever, that U.S. politics has devolved into an alligator wrestling match.  How this will help the U.S. regain its “greatness” on the world stage is another story. Stay tuned….it’s going to be a wild ride! 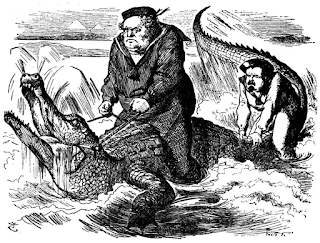 Posted by Raye Robertson at 1:20 PM