By way of introduction...

These are certainly crazy times for mundane astrologers--too much happening too quickly to digest, much less to write about in any depth! As always, though, some stories rise to the top of the heap and loudly broadcast the astrological dynamics of our times, which makes them great subjects for mundane analysis. These stories and the events they report are more than "trending"--they are redefining our life on this planet as we speak! While I love the efficiency of a good tweet that offers a ripping commentary in a handful of characters, sometimes a topic is worth a few more words and some in-depth consideration. That's my intent for this "diary" (probably a misnomer...there's no way this will be a daily affair!) -- to offer a quick, but thorough astrological look at the burning issues of the day and to invite your comments and thoughts. Agree or disagree with me, I welcome your polite, insightful comments.

Don Quixote (El Ingenioso Hidalgo de La Mancha) has made quite a comback in our cultural consciousness these days: the latest spin on The Man of La Mancha is thriving on Broadway and a new analysis of this endearing dreamer of "impossible dreams" is also coming out as we speak. The irony of this comeback is, of course, its timing, while the world is awash in toxic idealism and its consequences. Most dramatically, millions are on the move from the Middle East, Africa and Turkey to Europe and beyond, desperately seeking refuge from the tragic situations roiling their homelands. Extremism of all types represents an attempt to use idealism for less than ideal purposes. Suffice to say, Uranus and Pluto have certainly been having their Cardinal heyday, breaking down social structures and leaving chaos in their wake. As we'll see, Neptune is feeling its oats as well.

It seems to me that a major theme today is the confused line between idealism and the quest for power. Between delusion and righteousness. A situation closer to home kind of says it all: Is Kentucky county clerk Kim Davis a latter-day Quixote (or more likely, a “Christ” figure) for sitting in jail in contempt of the Supreme Court’s ruling on gay marriage? Wikipedia reports a birth date of September 17, 1965 in Morehead, KY (see Chart), and a few key highlights of her noon chart (no birth time available) seem to reflect the media stories pretty well. See the chart below. 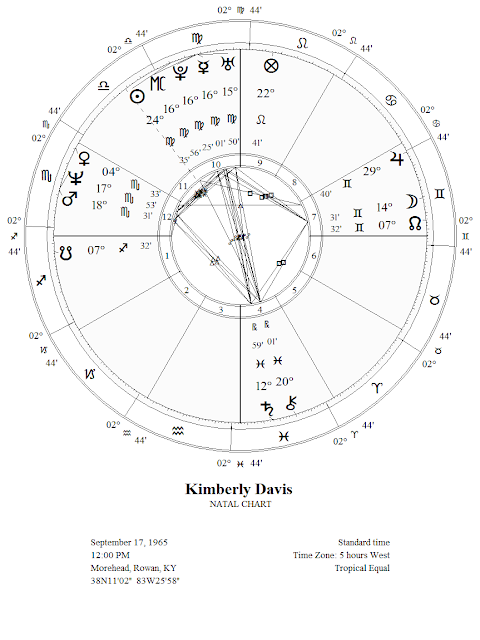 For starters, Davis has a potent 29th degree Jupiter in Gemini, which squares her 24° Virgo Sun and is disposed by her 16° Virgo Mercury. Mercury falls between and is squeaky close to both Pluto and Uranus (a remarkably tight stellium). The controversy over removing her “name” from marriage licenses issued by the Clerk’s office is clearly seen here: Putting her “hand” (Mercury) to those certificates is, in her mind (Sun), intimately tied in to her faith (Jupiter) and to her ideological concept of purity (Jupiter in Gemini-Mercury in Virgo).  The Moon's position is unconfirmed (no birth time), but the noon chart suggests that her Moon is probably in Gemini also, quite possibly within orb of a square to her Virgo stellium. Words and emotions are fused even more tightly into a compelling ideological mix.

In Davis's words, the issue of sanctioning a gay marriage is a “heaven or hell” decision; with her tight Mercury-Pluto-Uranus conjunction in perfection-minded Virgo (Hades/Pluto’s abduction of the virgin Persephone comes to mind), this unwillingness to follow the law because of her beliefs is not hard to see. There is also, of course, the very real question of power at stake—and the delusions that often accompany power.

Davis’ tough Virgo stellium leaps off the page when we see that it opposes her Saturn (12° Pisces) and Chiron (20° Pisces). Together, this speaks to both power and delusion—in this case, manifesting as a weighty feeling of Saturnian responsibility and an internalized, wounded “Christ” figure. Saturn’s debility in Pisces clouds her sense of public responsibility, leaving her open to Neptune’s capacity for delusion. Chiron placed in Neptune’s domain can instill a deep-seated fear of being forsaken by God (or the “government” by default) and a taste for martyrdom. One person’s delusions of “speaking for God” are another person’s deeply held convictions, of course, but with Mercury as the filling in her Uranus-Pluto “sandwich,” all opposed by this painful Saturn-Chiron-Neptune mix, it’s not surprising that Davis is fully convinced of her beliefs/delusions; she feels them in her very core.

Neptune in Scorpio disposes the Pisces mix, all the while wearing a rather intense frown (similar to Davis's booking photo), probably from rubbing elbows with Mars (tightly conjunct) and its co-dispositor Pluto (by tight sextile). The Mercury-Uranus addition to that sextile suggests that Davis relishes what she sees as a fated “teaching” (Virgo-Scorpio) opportunity on the issue of gay marriage. All of this mutable/fixed energy, anchored by the “big guy” Jupiter in Gemini assures that Davis’s zealotry spins a truly coherent universe in her mind—one in which she feels absolutely entitled to preach and rule. The problem for the larger society arises when she projects (consciously or unconsciously, same difference) her perceived absolute authority on to the affairs of her public office.

Viewed astrologically, the psychology driving her quest seems equally stark. She won’t be the first or the last to cloak rage, defensiveness and self-righteousness—especially as inspired by Neptune, Mars and Pluto—in the aura of religious belief and the will to “martyrdom” (imprisonment). Her Scorpio grouping (Venus, Mars and Neptune) and its chart interconnections suggest that sexuality is an exceedingly intense subject for her. Scorpio energy can feel threatening enough; better to be on the defense. Suffice to say, it’s not surprising she feels at home in a dogmatic Christian sect that rejects the full range of human sexuality options. Her out-of-sign Venus-Jupiter trine assures this issue will loom large in her mind and emotions.

Under Davis’s administration, her Office became an ideological fiefdom in which she could project any discomfort she may have in regards to sexuality, framing it all as a quest for “religious freedom.” Predictably, she’s garnering the media attention (Mercury-Uranus) to do so. The politicians who quickly aligned themselves with her have calculated the wedge-issue potential for this “quest” and they like what they see. What better way to distract voters from the harder, less emotional issues of the day?

By claiming to speak for God, Davis is also tapping into the priestly power Pluto and Neptune offer in her Virgo-Scorpio sextile, and she appears eager to take her message into their collective domain. In the process, the fragile line between religion and government is erased even further. With Saturn in Pisces trine her Mars-Neptune and disposed by her Neptune and ideologically-charged Jupiter in Gemini, she probably won’t be silenced any time soon.

This same constellation of energy has served Davis's political ambitions well to date (running for office as a Democrat, amazingly); it'll be no surprise if she becomes the new standard bearer for Bible-Belt fury this coming election cycle. “Tilting at windmills” takes many forms. 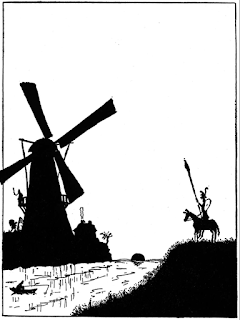